I’ll translate it from legalese into what they are really saying are my fatal flaws: 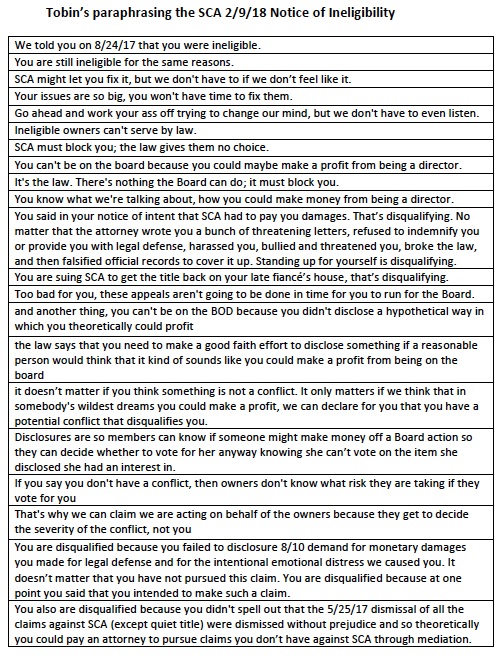 The Election Committee and the GM predictably refused to acknowledge my appeal in the same manner they treat all complaints. Send to the round file. Don’t listen to both sides. Don’t do anything to resolve the situation. Treat the appellant like dirt. Call the attorney. Make the owners pay him $325/hour to get rid of the pest. 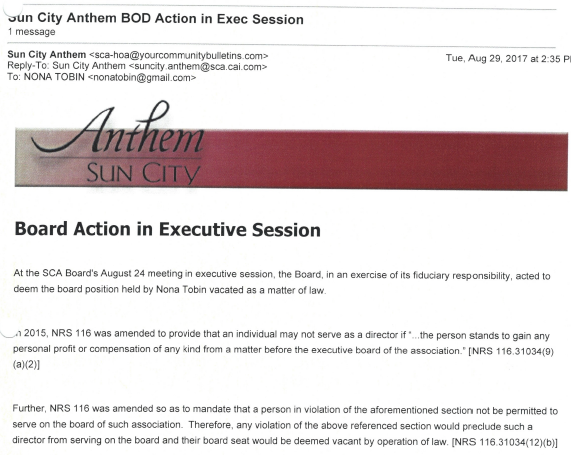 How can they do that? OPERATION OF WHAT LAW?

The attorney is totally off base. And, in doing this, his conflict of interest is showing. He is not serving the owners who are paying him. He is serving the interests of the GM, himself as SCA’s debt collector, and individuals on the Board.

For him to be right, dozens of laws, CC&Rs and bylaws provisions would have to be violated or “deemed vacated”.

Not to mention the facts that:

Why would the other Directors do this awful thing to you?

I am all over them about the GM’s and attorney’s undisclosed conflicts of interest, but they have the full support of the Board President, Rex Weddle, who tried every which way to Sunday to make himself into a king and me into a second-class director who he did not authorize to get the same information or participate in Board deliberations which he only “real” Directors to participate in.

These three “leaders” have fed the Board a line of BS about how evil I am and that I have told their secrets. It is nonsense, of course, but it was very convenient for the other Directors to swallow it because it fit the “Us against her” model that they used from day 1 to marginalize me.

All of this drama is what really allowed them to feel self-righteous  declaring me ineligible for the Board. Claiming that I was making a profit from being on the Board was merely a pretext.  All the conflict between us was related to me blowing the whistle on their shenanigans. Only after I informed them that I intended to file an intervention affidavit with the Ombudsman to complain about harassment and retaliation did they start falsely accusing me of a secret profit motive.

In fact, the letter to dump me off the Board last August was clearly in retaliation to my intended complaint of retaliation against me for prior complaints about their multiple statutory violations, secret meetings, and the GM using the SCA’s attorney for her own private benefit.

99% of you can stop reading here. The rest of this blog is primarily links to laws and rules that were violated.

This detail is for the benefit of the NRED investigator to facilitate her completing the investigation with the required 60-day lead time before the June CIC Commission meeting where, hopefully, these issues will be adjudicated.

The serious risk here is that a negative ruling could set a bad precedent for around 3,000 HOAs in Nevada if Boards or attorneys or managers could bypass voters and dump owners off the Boards for political reasons without any recourse.

What laws were ignored and what lies were told to get rid of me?

To “deem the board position held by Nona Tobin vacated as a matter of law” to be valid, legally-enforceable act, the following preposterous notions would also have to be true instead of the big, fat lies that they are:

24 thoughts on “Why can’t I be a candidate for the Board?”