NRS 111.175  Conveyances made to defraud prior or subsequent purchasers are void.

1.  A person shall not, in the course of an enterprise or occupation, knowingly and with the intent to defraud, engage in an act, practice or course of business or employ a device, scheme or artifice which operates or would operate as a fraud or deceit upon a person by means of a false representation or omission of a material fact that:

(a) The person knows to be false or omitted;

(b) The person intends another to rely on; and

(c) Results in a loss to any person who relied on the false representation or omission,

9.  Taking property from another under circumstances not amounting to robbery;

26.  Receiving, possessing or withholding stolen goods valued at $650 or more;

28.  Obtaining possession of money or property valued at $650 or more, or obtaining a signature by means of false pretenses;

29.  Perjury or subornation of perjury;

1.  Any person who is injured in his or her business or property by reason of any violation of NRS 207.400 has a cause of action against a person causing such injury for three times the actual damages sustained. An injured person may also recover attorney’s fees in the trial and appellate courts and costs of investigation and litigation reasonably incurred. The defendant or any injured person in the action may demand a trial by jury in any civil action brought pursuant to this section. Any injured person has a claim to forfeited property or the proceeds derived therefrom and this claim is superior to any claim the State may have to the same property or proceeds if the injured person’s claim is asserted before a final decree is issued which grants forfeiture of the property or proceeds to the State.

4.  Any civil remedy provided pursuant to this section is not exclusive of any other available remedy or penalty

NRS 207.480  Order of court upon determination of civil liability.

2.  A trustee under a deed of trust must not be the beneficiary of the deed of trust for the purposes of exercising the power of sale pursuant to NRS 107.080. 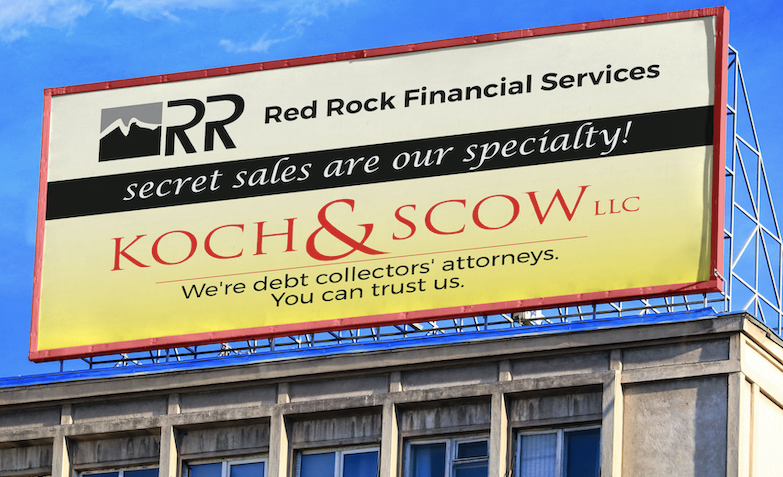 Plaintiff Nona Tobin repeats, re-alleges, and incorporates herein by this reference the allegations hereinabove inclusively as though set forth at length and in full herein.

Defendants, and each of them, misappropriated or otherwise improperly took possession of monies which belonged to or should have gone to Plaintiff.

As a direct, proximate, and foreseeable result of Defendants’ acts, Plaintiff has been damaged in excess of $15,000 and in an amount to be determined at the time of trial.

Defendants’ acts were committed with fraud, oppression, and/or malice, entitling Plaintiff to punitive damages pursuant to NRS 42.005 in an amount to be determined at the time of trial.

As a direct, proximate, and foreseeable result of the Defendants’ acts, it has become necessary for Plaintiff to secure the services of an attorney, and Plaintiff is entitled to recover fees and costs incurred herein as damages. 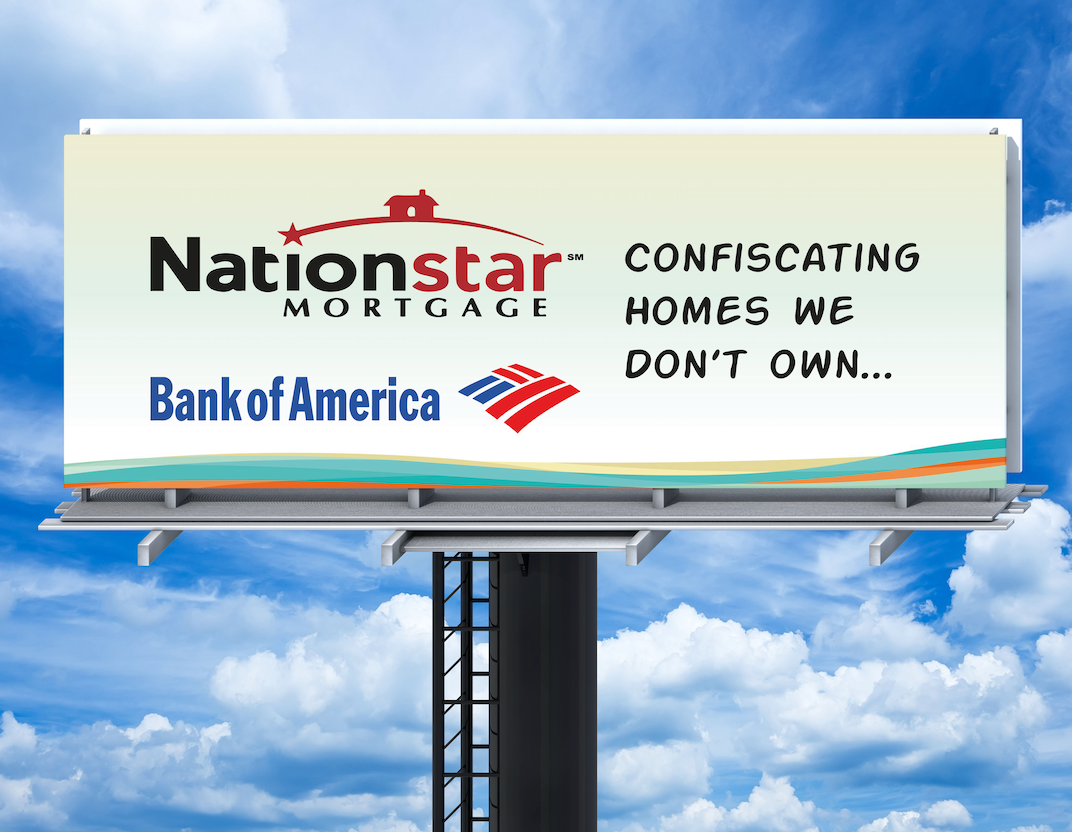 What is the dispute with Nationstar?

The dispute is over a $436,000 Western Thrift & Loan Deed of Trust (DOT) executed by Gordon Hansen on 7/15/04. Nationstar serviced the loan beginning on 12/1/13 on behalf of an investor NSM refused to identify.

On 12/1/14, Nationstar recorded a claim that Nationstar was owed the $389,000 balance that remained outstanding after the borrowerʼs death.

That Nationstar rescinded its provably false, opportunistic claim didn’t stop Nationstar from stealing a house for a debt it was not owed.

Laws implicated when considering appropriate sanctions for Nationstar and its attorneys

CONFISCATION OF PROPERTY WITHOUT FORECLOSING

(b) Representations to the Court. By presenting to the court a pleading, written motion, or other paper — whether by signing, filing, submitting, or later advocating it — an attorney or unrepresented party certifies that to the best of the person’s knowledge, information, and belief, formed after an inquiry reasonable under the circumstances:

(1) it is not being presented for any improper purpose, such as to harass, cause unnecessary delay, or needlessly increase the cost of litigation;

(2) the claims, defenses, and other legal contentions are warranted by existing law or by a nonfrivolous argument for extending, modifying, or reversing existing law or for establishing new law;

(4) the denials of factual contentions are warranted on the evidence or, if specifically so identified, are reasonably based on belief or a lack of information.

No bank foreclosure was ever initiated on the Hansen deed of trust. Nationstar just stole it.

Neither servicing bank, (Nationstar succeeded Bank of America as servicing on 12/1/13) foreclosed on the Hansen DOT even though it was in default after Hansen died on 1/14/12.

Had Nationstar been the beneficiary of the DOT, it would have foreclosed or collected the debt by allowing the property to be sold at fair market value. NSM did not record a notice of default on the Hansen DOT.

Then, three months after the HOA foreclosed to collect $2,000 in delinquent HOA dues, NSM claimed that Bank of America gave NSM the Hansen DOT on 10/23/14.

Link to Nationstar’s 4/12/16 motion to substitute as real party in interest, set aside default and intervene

Link to Nationstar’s only other filed claims: 6/2/16 AACC claims against Jimijack

Nationstar never refuted any of the claims Nona Tobin asserted against Nationstar, but got away with it by lying to the court

Link to 7/29/19 Nona Tobin motion to dismiss Judge Kishner’s orders for lack of jurisdiction for Nationstar’s and Jimijack’s noncompliance with NRS 38.310 that was stricken from the record unheard due to ALL opposing counsels’ misrepresentations to Judge Kishner

Link to unheard 4/24/19 MVAC & MSJ Nona Tobin motion to vacate Judge Kishner’s 4/18/19 order that granted Nationstar’s limited joinder to the HOA’s unwarranted motion for summary judgment pursuant to NRCP 60(b)(3) fraud on the court and motion for summary judgment vs. all parties that languishes on the record unheard due to ALL opposing counsels’ misrepresentations to Judge Kishner about Nona Tobin’s right to represent herself.

Nationstar prevailed despite ALL declarations under penalty of perjury support Nona Tobin and not Nationstar, by tricking the court into ignoring all the evidence, such as…

SCA 5/2/19 OPPM TO TOBIN MOTION TO RECONSIDER AND

Exhibit “5” No valid Board authorization for sale

No affidavits support Nationstar’s claims, but so what?

In its 3/27/17 OMSJ, Nationstar claimed that on 12/1/14 Wells Fargo had given NSM the DOT. This was supported by a duplicitous declaration regarding business records.

In February 2019, Nationstar refused to produce any documents in response to Tobinʼs RFDs and interrogatories to prove any of its claims.

Nationstar produced no proof that it owned the Hansen DOT during two lawsuits over the validity of the HOA sale.

All the evidence Nationstar entered into the record actually proved the opposite, but it was never subjected to judicial scrutiny Nationstar.

The real owner of the Hansen DOT would have supported Tobinʼs efforts to void the sale so the DOT would not have survived as it the sale had never happened.

Tobin and Nationstar were initially aligned to get the court to void the HOA sale until Nationstar learned that it would be impossible to foreclose on Tobin since Tobin had put it into the record that she had documents that could prove NATIONSTAR did not have the standing to foreclose.

Nationstarʼs covert deal with Joel Stokes was solely to prevent the Court from conducting an evidentiary hearing that would have exposed the inconvenient truth that neither Nationstar nor Stokes could prove their claims.

Nationstar was excused from trial by saying all claims had been resolved by Nationstar-Jimiack settlement.

Link to Nationstar-Jimijack “settlement which was really a $355,000 deal between Civic Financial services and Joel Stokes

The HOA wrongly foreclosed, but not without Nationstarʼs assistance.

The banks could have stopped the HOA from foreclosing by recording a Notice of Default (NRS 116.31162(6)).

The HOA sale should have been cancelled when BANAʼs agent tendered $825 on 5/9/13 to cure the nine months that were then delinquent.

The HOA sale would have been avoided if the serving banks had not prevented four escrows from closing as escrows instructions were to pay the HOA whatever it demanded.

The HOA sale would have been avoided if Nationstar had not rejected the 5/8/14 $367,500 www.auction.com sale to MZK Properties.

Nationstar, the servicing bank that is supposed to be a fiduciary, acting on behalf of the investor, turned a blind eye to an 8/15/14 HOA sale for 18% of the $367,500 www.auction.com sale price that Nationstar had just rejected.

NATIONSTAR does not hold the original Hansen promissory note.

NSM 258-259 is a COPY of the Hansen promissory note that Nationstar entered into the record to trick the Court.

NSM does not have Hansenʼs original note, but NSM tried to conceal that fact by disclosing a COPY in NSM 258

All Nationstar’s disclosures in discovery were deceptive and fraudulent

Nationstar refused to produce any documents requested in discovery

Wells Fargo did not assign anything to Nationstar.

Page 7 is Morgan’s totally deceptive ploy to obfuscate the fact that Nationstar has no valid claim to be the beneficiary.

Servicing banks (those that handle the paperwork on behalf of the “beneficiary” who is the investor to whom the debt is actually owed).

The dispute with Nationstar is not because Nationstar wrongly foreclosed on the Hansen deed of trust.

The dispute is caused by: 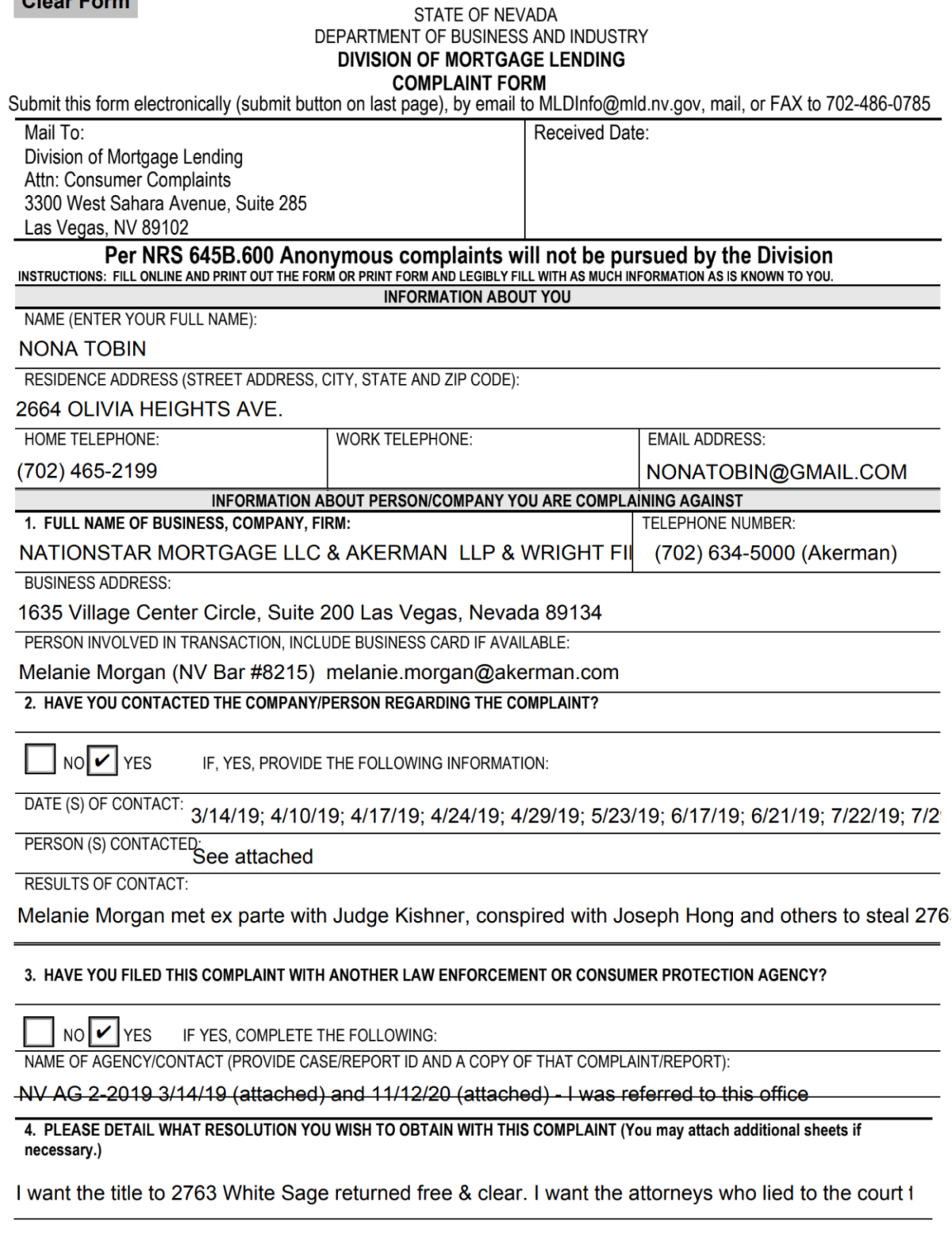 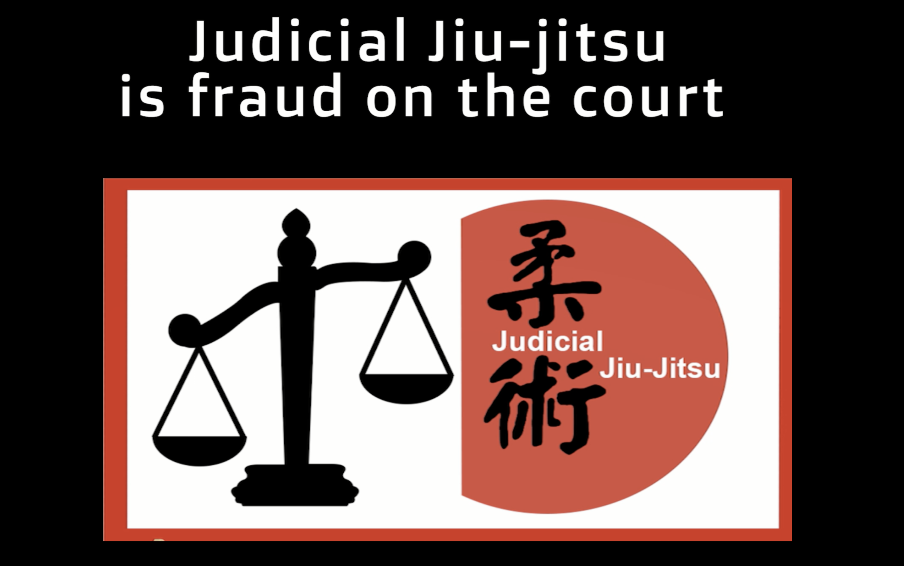 Fraud on the court video playlist

“WHY DID QUICKEN SECURE A LOAN WITH A HOUSE THAT WAS ALREADY MORTGAGED?

“PLEASE, JUDGE JOHNSON, WON’T YOU AT LEAST LOOK AT THE EVIDENCE?”

“How lenders cheat owners out of their houses“

“Is justice blind or just blinded by power and pals?”

1. Lied to the court

5/23/19 Stokes $355,000 deed of trust was misrepresented as Jimijack-Nationstar settlement of all claims

Jimijack’s deed was inadmissible per NRS 111.345

Concealed from Judge Kishner the 5/1/19 deed from Jimijack to Joel Stokes recorded before the 6/5/19 quiet title trial to determine if Jimijack had a title claim that was superior to Nona Tobin’s title.

Civil Conspiracy with Melanie Morgan to make a fraudulent side deal to obstruct Nona Tobin’s access to a fair, evidence-based adjudication of her claims.

Covered up the many false claims recorded to title

Hong’s combined court filings from 2016-2020 were all in opposition to Nona Tobin’s claims being heard. All were unwarranted, abusive, and obstructed the administration of justice by suppressing evidence and lying to the court.

9. Burden of proof not met

10. Prior pattern of deceit

It’s a crime to knowingly receive a fraudulent transfer

Jimijack’s deed was inadmissible per NRS 111.345

Judge Kishner didn’t know about the 5/1/19 deed to Joel Stokes before the quiet title trial to determine if Jimijack had a title claim that was superior to Nona Tobin’s title.