(1) By a Plaintiff. Persons with claims that may expose a plaintiff to double or multiple liability may be joined as defendants and required to interplead. Joinder for interpleader is proper even though:

(A) the claims of the several claimants, or the titles on which their claims depend, lack a common origin or are adverse and independent rather than identical; or

(B) the plaintiff denies liability in whole or in part to any or all of the claimants.

(2) By a Defendant. A defendant exposed to similar liability may seek interpleader through a crossclaim or counterclaim.

(b) Relation to Other Rules and Statutes. This rule supplements — and does not limit — the joinder of parties allowed by Rule 20. The remedy this rule provides is in addition to — and does not supersede or limit — the remedy provided by any Nevada statute authorizing interpleader. These rules apply to any action brought under statutory interpleader provisions, except as otherwise provided by Rule 81.

Why interpleader was an abuse of process

NRCP 22 was corruptly utilized by Plaintiff Red Rock after unlawfully holding the sale proceeds for more than six years. Red Rock had no legitimate grounds for filing the interpleader action. Red Rock was not exposed to any liability as there were no recorded claims for those proceeds other than Nona Tobin’s 3/28/17 deed. Red Rock filed the interpleader complaint for improper purposes, including, but not limited to, the obstruction of the fair, evidence-based adjudication of Nona Tobin’s claims for quiet title and equitable relief.

What do HOA bylaws have to do with it?

NRS Chapter 116 is the chapter of the Nevada Revised Statutes that governs homeowners associations AKA “common-interest communities”.

NRS 116.3106 defines mandatory provisions that must be included in an HOA’s bylaws.

NRS 116.3106(1)(d) requires that an HOA’s bylaws define what an HOA Board of Directors can delegate

1.  The bylaws of the association must:

(d) Specify the powers the executive board or the officers of the association may delegate to other persons or to a community manager;

Bylaws 3.18(b) levying and collecting assessments

SCA bylaws 3.18 (b) prohibited the Sun City Anthem Board from delegating policy control over “levying and collecting assessments”, but handled control of the debt collection and foreclosure function over to Red Rock based on the advice of its managing agent, FirstService Residential (FSR) who unjustly profited by misinforming the volunteer members of the HOA Board about their fiduciary duty to the HOA and to the common good of the membership at large.

FirstService Residential (FSR) was both on contract with Sun City Anthem to be the managing agent and held the NRS 649 debt collection license doing business as Red Rock Financial Services, a partnership (EIN 88-0358132)

Link to RMI-SCA 1/1/10 management agreement is relevant only insofar as the HOA signed the contract with FSR after its agent RMI management, LLC was purchased by, or merged with, or somehow or another, morphed into FSR.

Secondly, this financial conflict of interest is relevant in that it allowed the agents to control all the records in a manner that allowed them to cover up the misappropriation of funds as well as the wrongful foreclosure of a dozen Sun City Anthem homes in 2014 when the transfer of managing agents occurred.

Bylaws 3.18(e) depositing funds in an approved bank and using funds to operate the HOA

Red Rock did not deposit the funds collected anywhere that they were used for the operation of the HOA.

The funds should have been placed in a Sun City Anthem Trust Account and certainly not in a Red Rock Financial Services Trust Account.

Red Rock did not comply with these SCA bylaws restrictions on the proper depositing of these funds into an account where the Sun City Anthem Board controls the signatories.

The Sun City Anthem Board is ultimately accountable for the funds collected on behalf of the HOA under the HOA’s statutory authority. The bylaws provision was obviously required in order to prevent the very type of conversion that FSR dba Red Rock perpetrated here.

By not complying with the bylaws, the proceeds of this sale and at least a dozen other Sun City Anthem foreclosures were retained in an unaudited, unsupervised account, misnamed as an “attorney trust account”. None of these funds were under the proper control of the HOA Board. These funds, belonging to Sun City Anthem, were wrongly under the proprietary control of a partnership with undisclosed partners, Red Rock Financial Services EIN 88-0358132 and/or Steven Scow, an individual, and/or Koch & Scow LLC.

Red Rock agent/employee Christie Marling instructed Steven Scow to deposit the “excess” proceeds of the sale with the court for interpleader on 8/28/14. Steven Scow did not do it.

Neither the Sun City Anthem Board nor the SCA managing agent FSR nor the SCA debt collector FSR dba Red Rock complied with CC&Rs 7.4 when they imposed the sanction of foreclosure on the alleged violation of delinquent assessments.

None of the notice and due process required by the HOA’s CC&Rs were provided prior to selling 2763 White Sage as the sanction for an alleged violation of $2,200 delinquent assessments.

Further, the assessments were only delinquent due to the malicious misconduct of the HOA’s agents, FSR and FSR dba Red Rock, who THREE TIMES misapplied or rejected payments of assessments prior to the sale, and then lied and falsified documents to cover up their crime. 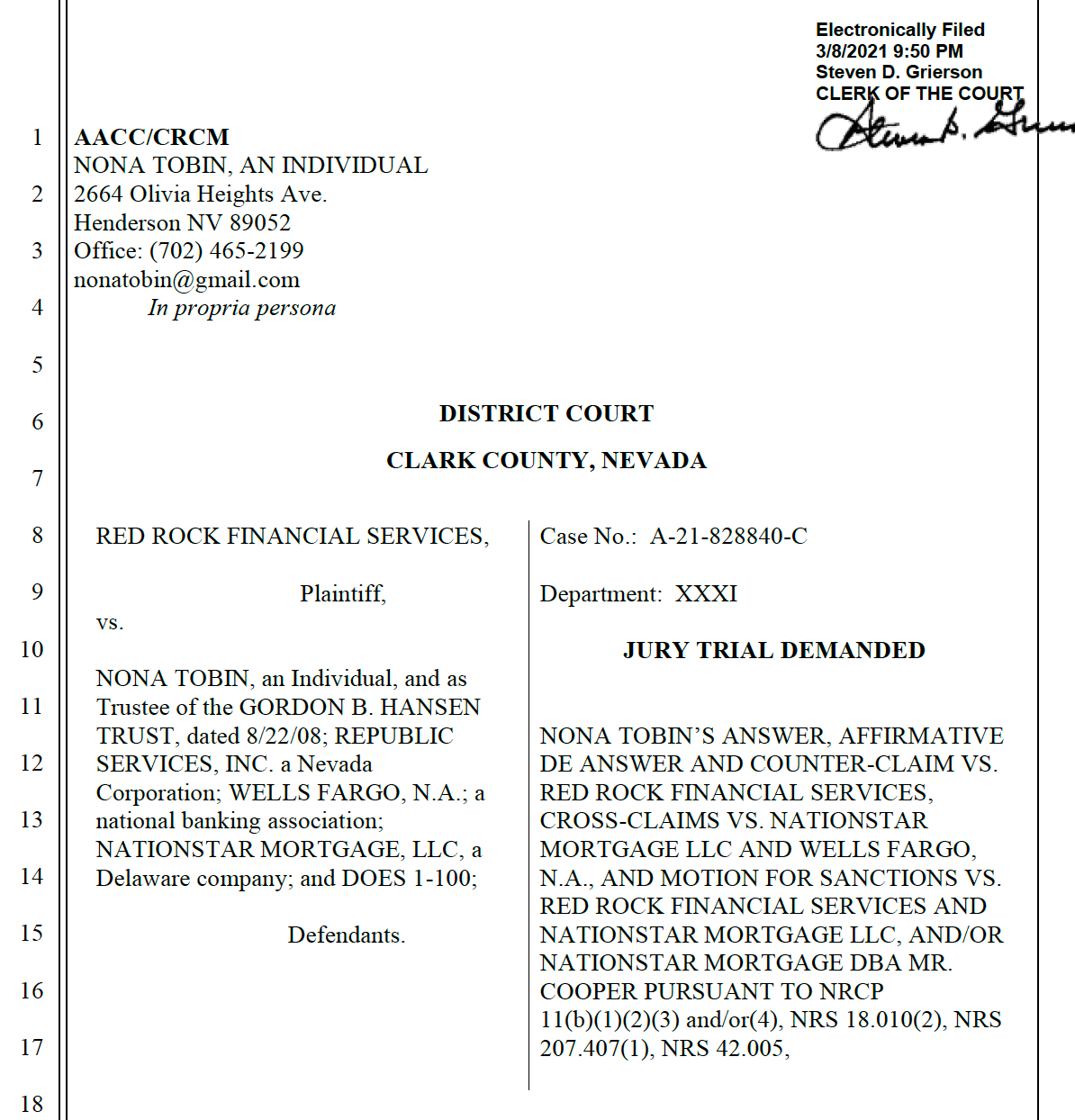 First cause of action: Interpleader

The court must find that the proceeds of the 8/15/14 must be distributed to the only claimant, Nona Tobin, immediately with interest, sanctions and penalties for failure to comply with the statutory requirement to distribute the proceeds immediately after the sale.

Red Rock did not comply with the statute

RRFS’s agent/employee Christie Marling was the “person who conducted the sale”.

RRFS 052 shows Christie Marling COMPLIED with 3(a) and sent a foreclosure deed to the purchaser.

Ombudsman’s records show that Christie marling DID NOT COMPLY with 3(b) as no foreclosure deed was sent to the Ombudsman following the unnoticed 8/15/4 sale.

RRFS 047 and RRFS 048 show that Christie Marling TRIED TO COMPLY with 3(c) by instructing Steven Scow to deposit the funds with the court for interpleader.

Steven Scow DID NOT COMPLY with 3(c) and did not deposit the funds with the court as instructed by the person who conducted the sale.

Second cause of action:

1. Link to HOA bylaws restriction on delegation of control over funds collected for the HOA

3. Excerpt of 10/15/14 email shows RRFS rebuffed my attempt to make a claim for the excess proceeds by saying it was deposited with the court.

4. Link to 4/27/12 RRFS debt collection contract that was concealed in discovery that contains the unenforced indemnify provision that Red Rock has unjustly profited from at the expense of Sun City Anthem homeowners.

Third cause of action: Racketeering

In Nevada, the elements for a claim of conversion are:

There was no electronic service of the notice of departmental reassignment as Steven Scow did not put any defendants’ service contacts into Odessey.

Service on Nona Tobin, as an individual

link to affidavit of service on Nona Tobin, an individual

Service on Nona Tobin, as a trustee

Unnecessary because Steven scow knows the Hansen Trust was closed in 2017.

link to affidavit of service on Nona Tobin, as trustee

link to affidavit of service on Wells Fargo

Obviously, Wells Fargo will not file a claim for the excess proceeds.

Obviously, Nationstar will not file a claim for the excess proceeds.

Link to affidavit of service on Nationstar

Service on Republic Services was unnecessary because its liens were released in 2017.

link to affidavit of service on Republic Services

Link to disclaimer of interest by Republic Services

Obviously, Republic Services will not file a claim for the excess proceeds.

Steven Scow knew filing for interpleader more than six years late when only one person had a recorded claim was unwarranted.