At least the first hour of the meeting was dedicated to blaming bloggers for all that is wrong, including the loss of SCA property values. It was a stunning example of how the Board marches lock-step against  owners rights and reflexively resists holding itself and the GM accountable for fixing problems of their own making.

Board beliefs vs. an alternative point of view

Tom Nissen listed his beliefs – all concerns shared by the Board – as his parting gift to the membership.

My beliefs offer another, albeit unwelcome, perspective, to show the way I think the Board and GM could better create value for owners. 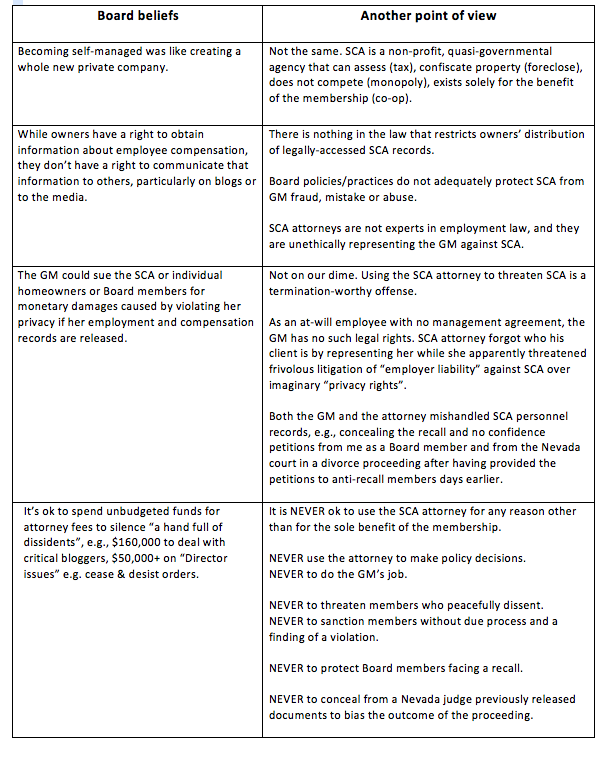 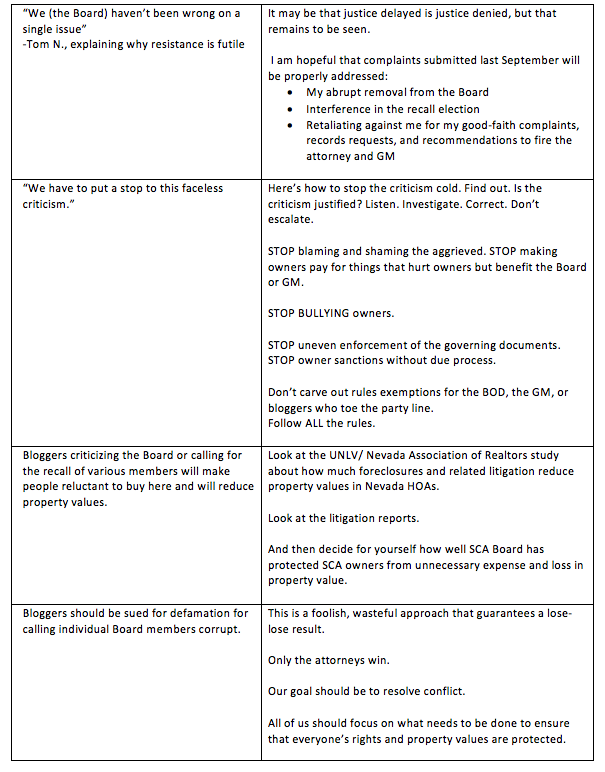 Click here to link to the article about the UNLV study on HOA foreclosures referenced above.

Next time, I’ll share with you my planned request to correct the false and defamatory statements in the April SCA litigation reports. I didn’t speak up at the meeting because I was afraid I’d get lynched for complaining.

The frustrated sentiments of the Army Chief Counsel, Joseph Welch, speaking to Senator McCarthy in 1954  (15-second video above) resonate with me as they speak of a man who has simply gone too far.

I want to express these same feelings to David Berman. I want him to stop his unwarranted and unprovoked attacks against me, and against any other SCA owners, whose only sin has been having the temerity to tell him that he is wrong and that his vitriol is damaging more than to his targeted victims. It is  detrimental to the health and peace of mind of the entire community.

“Until this moment, Senator, I think I never really gauged your cruelty or your recklessness. … Let us not assassinate this lad further, Senator. You have done enough. Have you no sense of decency, Sir. At long last, have you left no sense of decency?”

“When certain folks in our community decide to turn someone they don’t like into a villain, it appears there is no limit to the tactics they will employ to denigrate their targets, even when the “documentation” they disseminate to make their points is demonstrably and provably false.” – David Berman

David Berman may be utterly lacking in self-awareness. Or he may believe his own press so much that he doesn’t see anything wrong with the way he treated me over months of totally undeserved attacks he made against me as a Board member which led up to my 8/12/17 notice of intent to take formal action to try to get him to stop.

The conclusion of my complaint below shows my frustration at being one more in a long line of owners who have been cruelly victimized by David Berman instead of simply being thanked for volunteering to share my expertise.

As this was written two weeks before I was kicked off the Board, I still thought I could accomplish my three stated goals in a two-year term.

Please, in the name of all that is holy, just stop

Apparently, just asking David Berman to stop maligning my character was too much to ask. 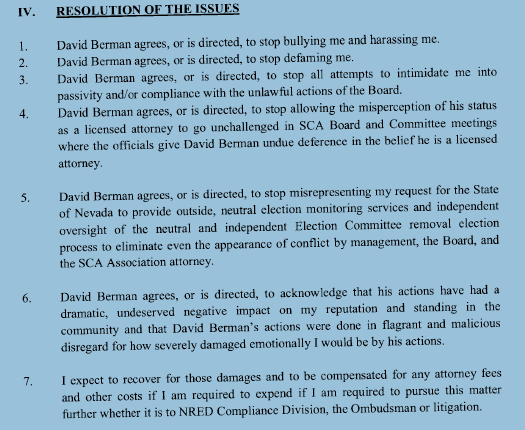 So, why didn’t I go forward with this complaint?

David Berman sent the defamatory email below to the Board, but this email is the basis for the Election Committee developing the false belief that I had not only released confidential information, but that meant I was a bad person who could not be trusted. David Berman makes false statements about me, maligns my character, but gets away with it. He has quite a hold on the people in power to a level that I consider to be undue influence.

This horrible, hateful email very effectively painted me as an evil person who deserves bad treatment. David Berman has manipulated those in power to encourage them to gang up on me as he has done to others, and in this email he also continues his decade-long use of Bob Frank as an object lesson.

David Berman stirred up the trouble by conjuring up a new evil persona for me out of whole cloth, and then gave the Board and the Election Committee the permission to shun me and treat me like a pariah. 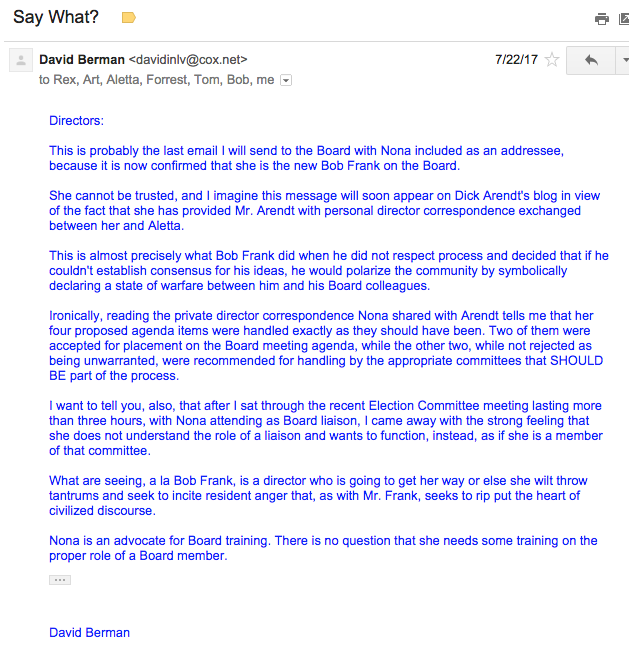 Character assassination by one lacking in character is galling

This is a very big deal to me to have my character maligned in this cruel, insulting and totally abusive manner. I spent a career in public and non-profit service, including administering a civil service system and controlling  personnel, discipline, medical and disability records for the workforce of the 10th largest city in the country.

I was NEVER accused of mishandling confidential information or of violating my fiduciary duty. My trustworthiness and ethics were NEVER questioned.

On the other hand, David Berman has been disciplined for violating his fiduciary duty to his client and forged a judge’s signature to cover it up. If a client had done that, the client would probably have been criminally charged and jailed, but attorneys tend to be reluctant to mete out strong discipline to one of their own.

David Berman’s law license was suspended for a year in 1991, and then he surrendered it. He cannot legally portray himself as an attorney. Yet, many people treat him with deference believing that he is one.

With a disingenuous sleight of hand, he is still able to manipulate people into believing that they should respect his word despite his history of unethical conduct.

It’s even more galling that, at the same time, he uses his considerable skills at palace intrigue to persuade a good chunk of people that they should not trust the word of a woman with a life-long, spotless record of competent and ethical community service.

David Berman got other people to stone an innocent woman while he egged them on.

And then he cries like a baby when the woman starts throwing stones back.

David Berman bizarrely just challenged me to produce evidence of his interference in the recall election in exactly the same manner as Gary Hart self-destructed his Presidential bid by challenging the New York Times to “put a tail on him” before he spent the weekend on his boat, Monkey Business, with a woman not his wife.

Wow, David, if you insist. I have a novella worth.