As you’ve no doubt noticed, the instructions on voting are confusing and the normal voting procedures have been changed. Here are some answers to the most frequently asked questions.

What return address do I put on the envelope if I own multiple properties in Sun City Anthem?
Put the address where each ballot was mailed. You may also note each property address on the outside envelope that contains the ballot envelope for that property’s vote.

What if I mailed my ballot in without any return address?
Contact Ovist & Howard at (702) 456-1300 for replacement ballots. Ballots without a return address that matches where a ballot was mailed will not be counted.

What is the deadline for my vote to count in the removal election?
Your ballot must be RECEIVED by 5 PM on Thursday, October 26
by Ovist & Howard, 7 Commerce Center Dr. Henderson 89014

Can I drop my ballot off at Anthem Center?
No. Your ballot must be mailed or hand delivered to Ovist & Howard 7 Commerce Center Dr. Henderson 89014 so it is received before the 5 PM, October 26 deadline.

If my ballot got coffee stains on it, can I copy my neighbor’s ballot?
No. Only original ballots will be counted.

How do I complain if I think this election is unfair?
Contact the Ombudsman or the NRED Investigator or both.
Charvez Foger, Ombudsman
The Ombudsman’s Office,Nevada Real Estate Division
3300 W. Sahara Ave., Suite 325 Las Vegas, Nevada 89102
702-486-4480  Website: www.red.nv.gov
cicombudsman@red.nv.gov
https://scastrong.com/action-report-election-issues-to-the-ombudsman/

You may also contact the investigator who is assigned to coordinate the numerous complaints currently filed against SCA Board, GM Sandy Seddon and attorney Adam Clarkson.

Will it do any good to complain?
There are already serious complaints submitted to the Ombudsman against Sandy Seddon, Attorney Adam Clarkson, and BOD President Rex Weddle. It is important that the enforcement authorities hear from you as well if you believe the process has been made unnecessarily difficult or if you believe votes are unfairly not being counted.

Contact the HOA Investigator Christina Pitch, assigned to SCA complaints, including election interference, if you want your concerns on the record.

I have submitted several complaints to the Ombudsman, including several related to removal election interference. They have all been referred to the HOA Investigations Unit. On September 29, Section Chief Darik Ferguson instructed me to address all communications to Christina Pitch.

Two of my complaints are provided here as examples.

Email to Investigator forwarded an email of the GM’s refusal to put a written report updating the community about the removal election process in the Sept. 28 Board Book:

“Nona,
The Update was provided for reliance in relation to an oral summary of the status of the review of the petitions/removal election to be given at the meeting, and the update was drafted in a manner to be read aloud, not conveyed in writing.  Written documentation will not be provided as part of the board book.
-Sandy Seddon, CCAM, CMCA, AMS, PCAM | Sun City Anthem General Manager/COO”

This is an example of the many dirty tricks management is using to prevent the Sun City Anthem owners from knowing about the recall election which could remove the directors who are protecting her instead of the homeowners and who are abdicating too much policy authority.

After I submitted my complaint about how management and the attorney and board President interfered with the collection of names for the petitions, interfered with the neutral election committee, they continued to escalate by removing the election committee from the entire process in violation of SCA Election and Voting Manual, contracted with a CPA without any public adoption of such a contract or it being approved as it was not in the budget.

Now, the attorney (also paid over $73,000 over the budget so far) put out information about the dates the ballots will be sent out, and new restrictions, e.g.,that there will be no ballot boxes, and this information in written form will be withheld. Note that they have continued to withhold from me the audio file of the last two board meetings even though I have requested them in writing multiple times. (Note – GM finally gave me the audio recording of the Aug. 24 and the Sept. 28 Board meetings on Oct. 5, the day after I wrote this complaint to Investigator Pitch)

Thank you for your consideration of this additional information. I hope you understand the urgency because the ballots will be mailed on October 9, and owners’ completed ballots must be received by mail only by 5 pm (October 26) at the address of the CPA.

Voters are being forced to jump through hoops that have never existed in prior elections and which they will not be told about until it might be too late.

It is extraordinary chutzpah to kick me off the Board by a secret vote of six board members on unproven false charges and without a removal election just two weeks after petitions calling for an election to remove four of them were filed.

Please don’t let them get away with it.

My notarized & filed election interference complaint was referred to the Investigations Unit on Sept. 18 after the Board refused to respond AT ALL to the complaint on its merits (given to them on Sept. 2) or take any action whatsoever. 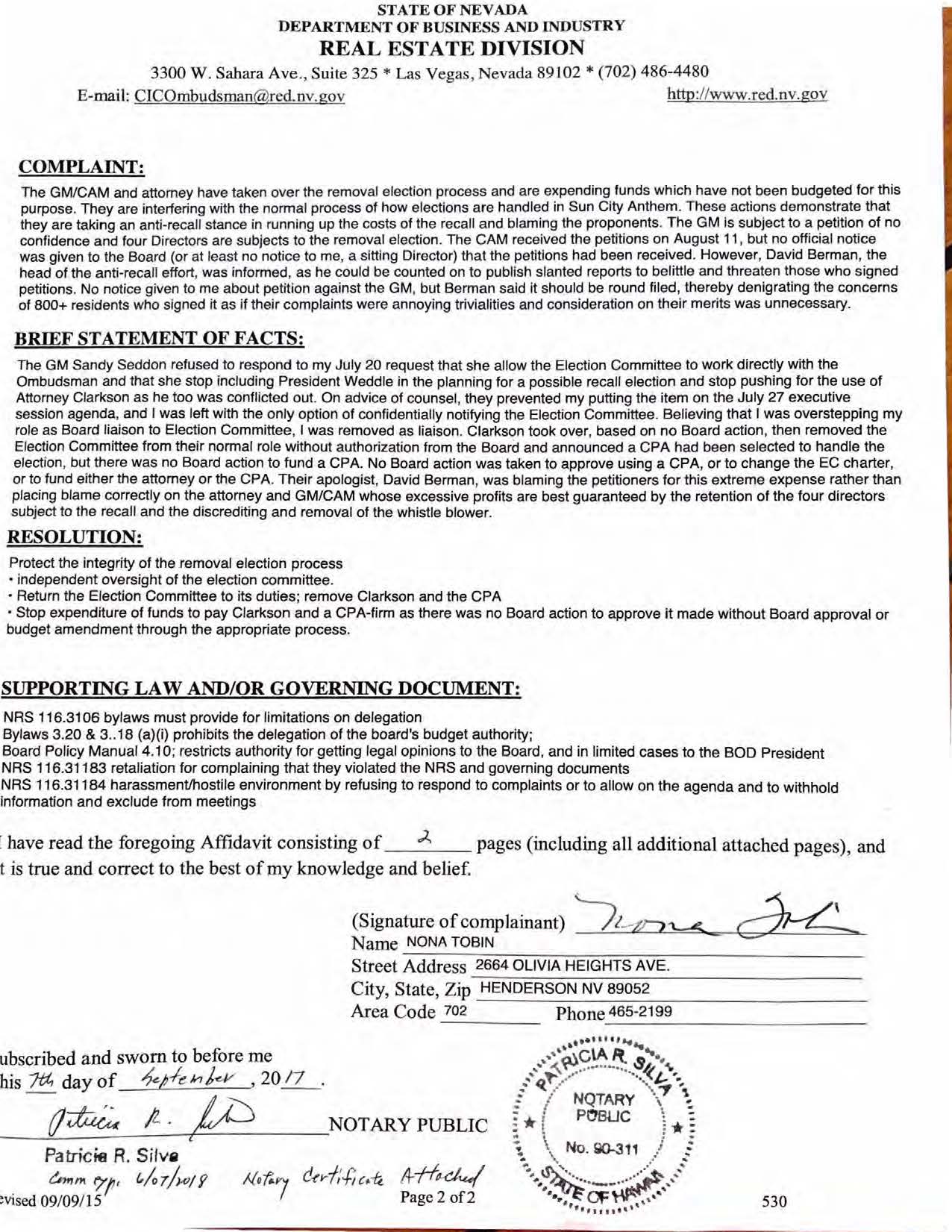 Let the Ombudsman hear from you.
Lots of people grouse to their friends or post complaints on blog sites, but it’s more effective to let the authorities know if your right to have a fair removal election process is being infringed. Here is the contact information for the Ombudsman and a sample letter that the author encourages you to copy or adapt NOW to let your voice be heard:

Dear Mr. Foger,
I am a resident of Sun City Anthem, Henderson, Nevada. We moved here over five  years ago and spend our winters here. I have watched  the constant disregard for the Laws of Nevada by the Board of Directors and the General Manager of our Homeowners Association.  Yet, the NRED does not appear to be acting on this situation.  I do now know what to do and need your help.
I know that you have various official complaints regarding the Board, the recall election malfeasance, the illegal firing of an elected Board member, and so forth.I do not know how to file a formal complaint so my email to you is the best that I can do.   I simply want you to know that I am completely supportive of the recall, the need for oversight by the NRED on the illegality of the Boards actions, and a the need for the Ombudsman to step in and stop the continued illegal actions of the Board of Sun City Anthem.
Please get involved.  Time is fleeting.  I beg you to help this community.
The recall ballots are now out and since the SCA board and administration does not support the recall, the process has been tainted.  Ballots have been mailed out without any identification and most people think these are just an advertisement from a CPA firm and will not be opened.      Unfair.  Please step in and help.

This is Allen’s call for you to take action to protect your right to vote on removal of Board members.

Subject: We need your help
I encourage everyone to send a similar letter to the Ombudsman’s office NOW.  If you support the recall…..the time to act is now.
The ombudsman has the information but seems to be slow to act.  If we all put pressure on the office, they may be more encouraged to step in.
With the bullxxxx of an envelope with the ballot that is unmarked as to content, many will just toss out as they do not know it is a ballot.
Also if the return address is not EXACTLY as the originally is written, it will be tossed.  The board made no formal announcement of the ballot being mailed so many are unaware of it.  The past presidents and opponents of the recall have used the clubs at SCA to try to kill the recall.
I say that everyone should just copy my email or revise and sent it to the ombudsman to encourage oversight.  It could help as there are now numerous formal complaints filed.
Act,  copy,  now
Allen