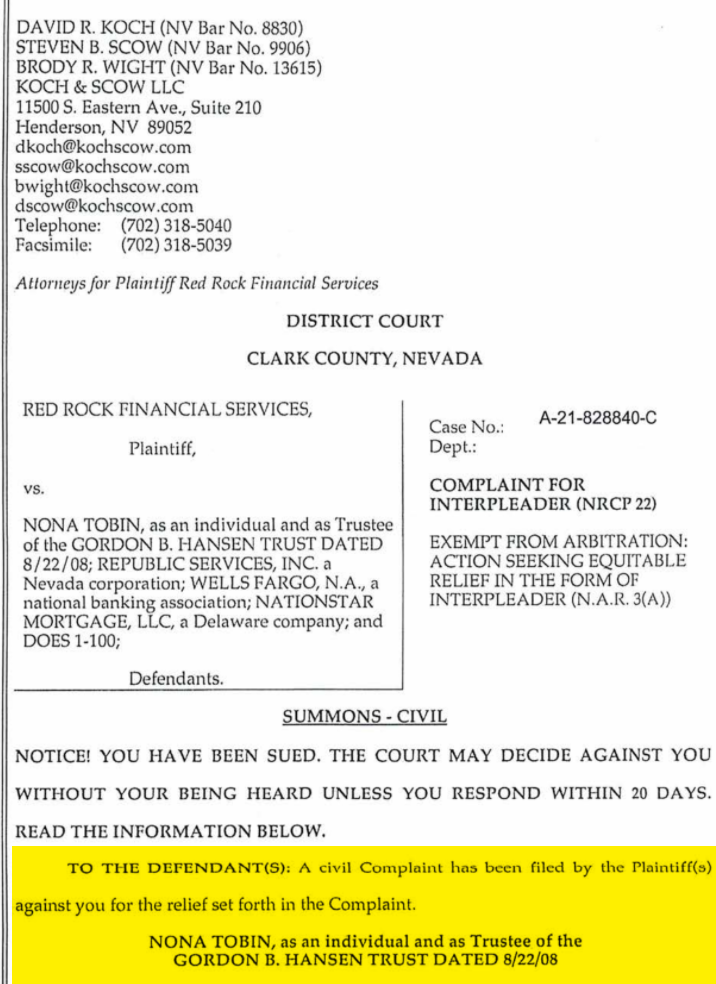 On 2/16/21, Red Rock Financial Services served a notice on Nona Tobin that Red Rock was suing her over the money Red Rock stole from her over six years ago.

Why is Nona being sued? What relief could Nona give Red Rock?

Red Rock sued Nona to obstruct a fair adjudication of her claims and to cover up its criminal conduct by suppressing evidence.

Nona still had to do a lot of work to deal with it.

The significance of Red Rock’s abusive, predatory debt collector’s corrupt business practices is that virtually none of its victims have the resources to fight back.

Poor people just lose by default because they don’t know what to do, and they don’t have anyone to help them.

Nona is fighting back.

These 19 affirmative defenses published here are one section of what Nona filed on 3/8/21 to get the money that Red Rock stole and to get penalties and damages.

3/8/21 Nona filed an answer, affirmative defenses, and a counterclaim against Red Rock

Each and every one of the Plaintiff’s alleged rights, claims, and obligations which it seeks to enforce against Defendant is, by Plaintiff’s conduct, agreement, or otherwise, barred by the doctrine of estoppel.

Plaintiff’s claim is barred as a result of its prior wrongful conduct. The HOA sale at issue is void, as it involved agreements to commit illegal acts.

Each and all of Plaintiff’s rights, claims, and obligations as set forth in the Plaintiff’s Complaint, has, or have, by conduct, agreement or otherwise been waived.

Sixth Affirmative Defense: (Failure to join the HOA as an alleged necessary party per to NRCP (b)(6))

Plaintiff alleged in its 6/23/20 motion to dismiss into A-19-799890-C that Nona Tobin’s failure to join the HOA as a necessary party under NRCP 19 to protect its interest in the proceeds was grounds pursuant to NRCP 12(b)(6) to dismiss her unjust enrichment claim against RRFS for failure to distribute the proceeds from the 8/15/14 sale.

In its 2/15/21 complaint for interpleader, RRFS falsely stated on page 3

10. In connection with the foreclosure sale, the Association was paid the money it was owed, and RRFS was paid its fees and costs incurred in collecting the debt as allowed by contract and Nevada law.

Seventh AFFIRMATIVE DEFENSE:(General and Equitable Defenses Applicable to All Claims)

Red Rock and its attorneys know there are no recorded liens with priority over Nona Tobin’s claim as an individual with a deed recorded on 3/28/17 the sole beneficiary and successor in interest to the Gordon B. Hansen Trust, dated 8/22/08.

Plaintiffs’ claims are barred by the equitable doctrines of laches, unclean hands, and failure to do equity by obstructing judicial scrutiny of the evidence to evade detection of the criminal conspiracy, racketeering, bid suppression, and other fraudulent conduct of the co-conspirators; provided falsified evidence in response to subpoena; withheld and misrepresented materials facts; conspired with others to commit a fraud on the court.

Any acceptance of any portion of the excess proceeds does not “satisfy” the amount due and owing to  Defendant NONA TOBIN as the result of the unfair and fraudulent foreclosure sale conducted by RRFS, and acceptance would not constitute a waiver of her rights under Nevada law or Sun City Anthem’s governing documents.

By reason of Plaintiff RRFS’s acts and omissions, Plaintiff RRFS has waived its rights and is estopped from asserting any claims against NONA TOBIN, either as an individual or as the trustee of the Hansen Trust.

By reason of Plaintiff RRFS’s acts and omissions, and conspiracy with Nationstar, RRFS is judicially estopped from claiming that Nationstar has any rights to the proceeds, as it was never was the Hansen promissory noteholder or the beneficiary or the trustee with power of sale

By virtue of its false evidence entered into the court record in response to subpoena, Plaintiff RRFS has waived its rights and is estopped from asserting that the HOA sale was valid to extinguish NONA TOBIN’s rights, privileges and title.

Plaintiff RRFS concealed that it had covertly, unilaterally rejected two super-priority tenders, either one of which RRFS knows, voided the sale in its entirety.

RRFS 047, 8/28/14 memo to Steven Scow, and RRFS 048, 8/21/14 $57,282.32 check made out to Clark County District Court, were not interpleaded in 2014, were retained in the wrong trust fund, violated RRFS’s fiduciary duty as Sun City Anthem’s agent, and were deceptive disclosures, following the same corrupt modus operandi as Koch & Scow have employed with multiple other undistributed proceeds.

Plaintiffs’ claims are barred in whole or in part because of the Plaintiffs’ failure to take reasonable steps to mitigate damages.

The HOA sale is void as noncompliant with the Property Clause of the United States Constitution.

Defendant NONA TOBIN cannot be deprived of her property interest in violation of the Procedural Due Process Clauses of the 5th and 14th Amendments of the United States Constitution and Article 1, Sec. 8, of the Nevada Constitution.

RRFS and Nationstar concealed that RRFS covertly rejected Nationstar negotiator Veronica Duran’s 5/28/14 offer to pay the HOA $1100 three months over the super-priority portion of the HOA lien to close the 5/8/14 www.auction.com $367,500 sale to MZK Properties to the HOA and/or its agents and therefore discharged the super-priority portion of the HOA’s lien, so that title by foreclosure passed to the buyer subject to the deed of trust.

The HOA sale is void as noncompliant with the CC&Rs 7.4 Clause that defines the due process required before a sanction can be imposed against a homeowner for an alleged violation of the governing documents.