Why knock them down & then kick them?

The Foundation Assisting Seniors (FAS) does not deserve to be treated as dead to SCA, “rubbed out” after being kicked to the curb.
After many successful years of partnership between FAS and SCA,

I won’t rehash all the unnecessary escalation by SCA, that culminated in evicting FAS from their 15-year home on the flimsiest of reasons, but some things should never have happened:

Yet, it has not been enough to force FAS out. SCA management is now refusing to print any article or picture in the Spirit if it says anything positive about FAS.

The recent incident that chapped my hide involved refusing to allow the Women’s Golf Club to report on the 2018 FAS Memorial Day Golf Tournament.

The most significant FAS fundraiser is this annual golf tournament at Revere in which 250+ golfers participate, and probably, 50 or more volunteers organize and put on.

In the past, the Spirit frequently had articles, maybe even a cover story, about the FAS Memorial Day golf tournament.  But not this year
The Women’s Golf Club liaison to the Spirit submitted an article for the August issue that included a reference to the FAS golf tournament.

The Spirit contact was polite and tried to help get, at least, part of the FAS article published. 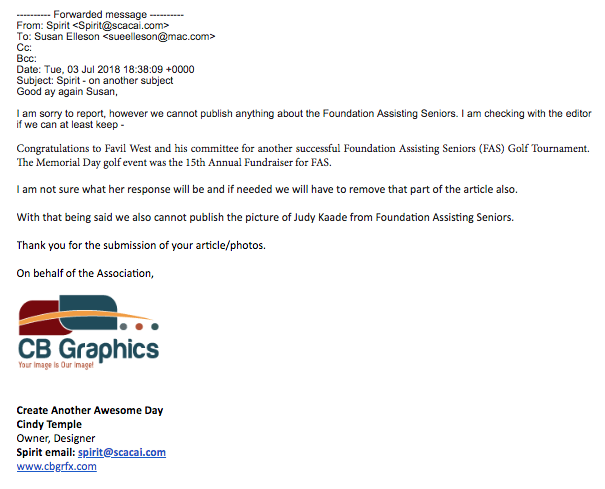 But SCA GM/Board would not allow it.  Why?
Why must FAS be treated as dead to SCA?

How do SCA owners benefit by this brutal break-up?

The rationale for evicting the Foundation was that FAS was using facilities that belong to the association, and it would be a violation of the Board’s fiduciary duty to let FAS get a free ride.

This is not true. FAS was a free service, an amenity, that many volunteers and donors from across the valley contributed to over the years. By the way, the anonymous donor has extended his offer to match all contributions until the end of July, and I think FAS is only at 2/3 of their $30,000 goal now.

FAS continues to provide 85% of its services to Sun City Anthem despite being evicted and the SCA Board approving $25,000 for the Community Services Group (CSG) to purchase durable medical equipment to duplicate FAS’s service to SCA residents.

“The total amount the Foundation has paid as a benefit to SCA has been nearly $200,000.”

Aren’t SCA owners being forced to pay more for less?

How is the GM/Board’s making services to owners more expensive and less convenient meeting their fiduciary obligations?

Compare the actual benefit SCA residents have already received from our long affiliation with the Foundation with the “betting-on-the-come” deal the SCA Board/GM almost cut to bring in a restaurant vendor:

That deal fell through, but I’m just saying…

I don’t think owners are well served when the GM/Board offers sweetheart deals to some people who can make a profit off the owners’ backs while other people who have served our community for years, but who are not in the current IN-GROUP, are beaten up like a poor step-child.

Really, why use volunteers when paid staff will do?