As I told you last week, I timely filed my application to be a candidate for the Board. Although I meet the legal requirements to be a candidate, two hours after the closing bell for applications, I received a 43-page document entitled “Notice of Ineligibility“, generated by the Clarkson Law Group @$325/hour to be fully paid for by SCA homeowners, that said I was disqualified to be a Board member.

Don’t I meet the legal requirements to be on the Board?

Absolutely. The law requires that I disclose that I am a member in good standing.

And the law and our bylaws require that I

“[m]ake a good faith effort to disclose any financial, business, professional or personal relationship or interest that would result or would appear to a reasonable person to result in a potential conflict of interest for the candidate if the candidate were to be elected”

I did. In fact, I disclosed everything twice.

First, using the official NRED form 850, I made my candidate disclosures in good faith on time, and, by law, SCA SHALL distribute the disclosures on my behalf because they include nothing defamatory, libelous or profane.

And, just to be safe, I voluntarily did a second set of disclosures, although the NRED Form 850 form I signed above clearly states:

“Any additional information provided by the candidate to the executive board is voluntary and is not a requirement under NRS 116.31034.”

Why did the letter say I was ineligible to run for the Board?

These self-serving rationalizations to keep me off the Board aren’t true, of course, and they are more than a little infuriating to have to deal with.

I consider this action to block my candidacy, and to disenfranchise at least the 2,000 voters who elected me to the Board last May, further unlawful, defamatory, politically-motivated retaliation for my outspoken advocacy for homeowners’ rights and my progressively more strident demands that the Board, Adam Clarkson, and the GM hold themselves accountable to the homeowners and not to their own power trips or financial self-interest.

In fact, much bigger potential conflicts have not been disclosed by Adam Clarkson and Sandy Seddon, and they are the ones who are financially benefiting from making these false statements (that I’m making a profit off being on the Board or that I’m failing to disclose that I could hypothetically make a profit) to keep me off the Board and to keep me from disclosing how much money they are actually making off the homeowners.

Anyway, here’s the gist of what the attorney’s letter says about why letting me run for the Board would pose a massive threat to SCA:

Are there matters before the Board that I could make a profit from?

On August 10, I sent a NOTICE OF INTENT TO FILE AN INTERVENTION AFFIDAVIT against the Board, the GM and Adam Clarkson for harassment and retaliation, for withholding  SCA records, excluding me from Board meetings, and other violations of their fiduciary duty.

Look at the date – 2 weeks before they kicked me off the Board as I walked into the August 24 Board meeting  – without any notice, due process, cause, or legal authority.  Kicking me off the Board was the Board’s only response to my complaint that I was being bullied and retaliated against, and now Clarkson is saying my requesting reimbursement of attorney fees is a demand for monetary damages that makes me ineligible to be on the Board.

That’s like beating someone up and throwing her out in the street, then beating her up again if she came back and wanted her hospital bills to be paid.

Look at what is actually being done here.
It could apply to any owner who speaks up. 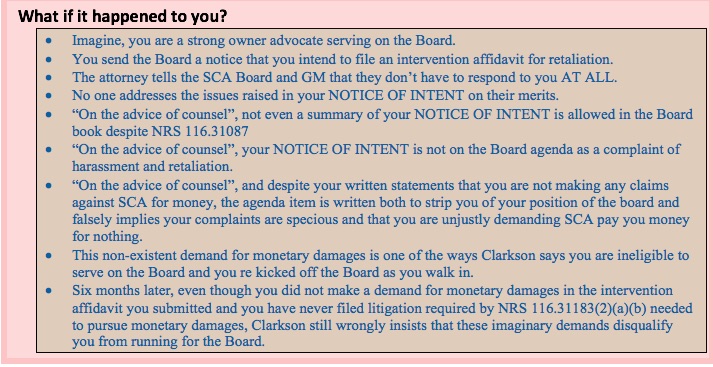 I have no demand for monetary damages against SCA. Period.

Quiet title litigation is not disqualifying per se.
NRS 116.31084 says what to do if a Director might make a profit from being on the Board:
1) Disclose it, and 2) Don’t vote on it.

Here’s why the quiet title litigation is not a disqualifying conflict except in Clarkson’s mind.

What potential conflict of interest did I fail to disclose?

Nothing.
Accusing me of it is just wrong. The attorney’s logic is specious and speculative. All claims against SCA were dismissed at a hearing on May 25, 2017, except quiet title that SCA has no financial interest in, but SCA attorneys didn’t file the order until September 19, 2017, a month after they kicked me off the Board.  Why?

The attorneys have filed false litigation reports for the past year claiming that the current status of the case was back in February 1, 2017. Why?

The most recent litigation report defamed me by falsely stating that I had been removed from the Board for cause. Why?

When the Clarkson Law Group was hired, Adam Clarkson failed to disclose prior employment that would appear to a reasonable person to be a potential conflict of interest requiring disclosure. Why?

The blog, “Who gets to decide who is eligible to serve on the Board?“, discusses why the SCA membership has more to fear from over-compensated, power-grabbing attorneys than from me, a homeowner advocate who also is also trying to get title back to a house that was essentially stolen by SCA’s former debt collector.