My granddaughter is six now, but a while ago, she loved knock-knock jokes. Her favorite one was apropos of the SCA Board race.

And yet, here I am. In Hawaii, but still knocking my head against the wall, trying to keep the SCA Board composition from being so blatantly manipulated.

I know no one will listen. I know that the sides have already been chosen. Lines have been drawn in the sand. Positions are entrenched.

It’s pointless. But I am still just OCD enough to need to put these points on the record – where they are out of reach of those who are distorting or concealing the official record for their own purposes.

Board candidates are disappeared 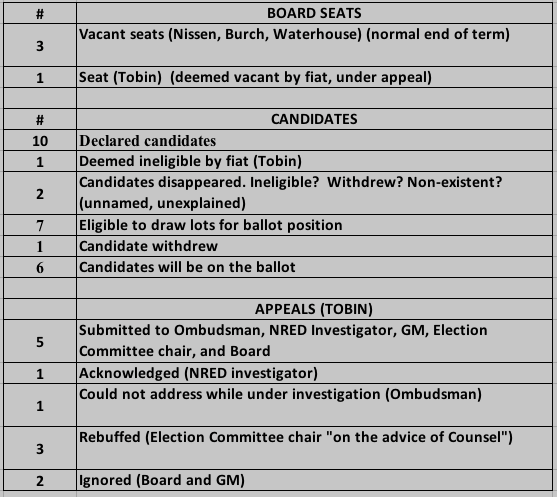 Why won’t owners run for the Board:
Fear of facing a recall petition?

Candidates Bob Burch and Aletta Waterhouse were themselves both subjects of the petitions signed by over 800 owners to remove them from the Board, but they decided to run again for another two-year term.

Amazing that over 800 owners signed petitions over a few Summer weeks to call for an election to remove Aletta Waterhouse and Bob Burch from the Board, but that did not deter them from running again.

Even more amazing. They were seemingly so untouched by the list of grievances in the petitions that they did not even deem those 800 owners’ complaints were worthy of being investigated or, if verified, addressed on their merits.

Not so amazing since they were completely secure in the fully-funded support of the GM and the attorney, they did not see any irony in how six directors voted in secret to remove me from my Board seat when ZERO owners signed a petition to call for my removal.

Did owners decide not to run because they saw what happened to a director that spoke her own mind?

From my perspective, the answer is obvious.

All the stops will be pulled out to protect a director who has closed ranks to march lockstep with the other Stepford directors to parrot the party line.

Step out of line, and you will be threatened. Privately berated and shunned. Publicly humiliated. Then you will be disappeared. No amount of owners’ money is too much to spend to force compliance to the party line. No rule of law. Total hard ball.

Would anyone bet a homeowner advocate could be effective on the SCA Board?

It is not a safe bet.

Not when six of the seven directors apparently can just secretly vote a dissident voice off the island. No trial. No finding. No process. No owner vote. Just goodbye. Can’t run again. Disappeared.

Not when Sun City Anthem has a blogger in Hedda Hopper’s McCarthy-era role to maintain a Black List.

…(to) actively oppose the election of any candidate who was tied to, or supported, the removal campaign.

Ask yourself…who’s spending owners’ money to control who sits on the Board?

Would Sandy Seddon have sicced attorney Adam Clarkson on a director who supported her getting paid double the market and wasn’t questioning her paying the CFO and Facilities Manager salaries that were also double the market rate?

Would President Rex Weddle have turned a blind eye to the GM using the attorney to authorize the expenditure of $90,000 to ensure that the recall election would fail and $40,000 – a combined $130,000 — to ensure that my removal by secret vote would succeed if our positions had been reversed?

Would he had let a dime of owners’ money be spent on the recall election if I, and not he, had been the subject of a recall petition?

How much would he have authorized expending of owners’ money  to pay the attorney to remove him if it were he, and not I, being falsely accused of making a profit from sitting on the Board?

Would attorney Adam Clarkson have assisted the GM to make a bogus threat of litigation against SCA, and a director individually, if they weren’t trying to silence that director who was questioning the legitimacy of both their actions while requesting information needed to make fully informed decisions? 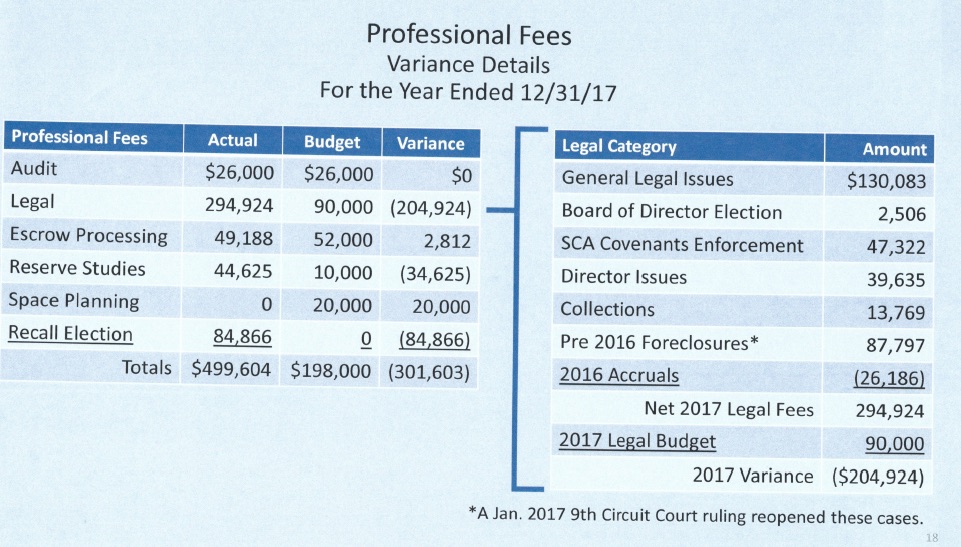 2 thoughts on “SCA Board election choices are narrowed by design”