The following was originally written and distributed by Ron Johnson and is republished here with his permission for you to see what others are saying about the current HOA Board and happenings. 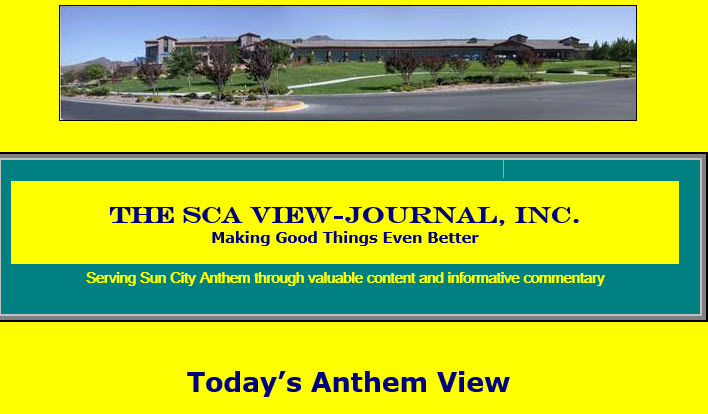 Fact Checking Some of OSCAR’s Claims

In a letter to residents, OSCAR’s leadership team of former board members and others have attempted to support their opposition to the Board Directors removal petition by making a number of claims about SCA’s self-management, financial condition and other issues. Unfortunately for the intended readers, the OSCAR letter makes a number of gratuitous and false claims, which I have commented on below.

Opinion and commentary by Ron Johnson

The number of NRS complaints filed is an invalid metric.

Financial hanky-panky or something else?

Contrary to what others may have led you to believe, the 2018 Budget portrayed a not so rosy picture for our association’s condition. While SCA’s financial condition has the appearance of being good, even “excellent” according to those OSCAR advocates, appearances can be deceiving. There is no doubt that homeowners will be reassured in learning that our assessments will not increase in 2018, but in view of what’s going on behind the scene, such reassurances appear to be merely hype and misplaced.

So, what’s going on behind the scene? The association has a number of financial problems, problems the board and management have been reluctant to adequately explain, address or even disclose. I suspect that more than a few ears were raised when Treasurer Forrest Quinn recently alluded to SCA’s “funding problem.” As I see it, those problems include the following:

Traditionally, hidden or invisible assets are not included in reserve studies, perhaps because they are not visible or due to the mistaken belief that such assets have a life expectancy of more than 30 years and, therefore, are not required to be reserved. As a result, there are no reserve funds set aside when such assets fail, thereby creating a funding problem.

That funding problem can be resolved in one of three ways: 1) a one-time only special assessment to fund the needed repair; 2) an increase in annual assessments, which was done in SCA for 2017 and subsequent years; or 3) utilizing existing reserve funds, which has the practical effect of robbing funds intended for Peter to pay for the work that Paul needs.

Note that the second option is effectively permanent unless the funds are subsequently returned to the homeowners after the initial need was satisfied. And note that the third option might create a shortfall in needed reserves.

Let’s take a look at the 2014 Reserve Study. That study, as all HOA studies do, sets forth a yearly plan of which equipment or projects will be repaired or replaced, presumably in advance of their estimated life expectancy. For example, the 2014 RS called for an estimated $225,000 in fence painting for 17 Villages in 2017. That didn’t happen, although some disappointed homeowners may have expected to have their fences painted in 2017. Such is life.

What did happen was that in 2016 in connection with the “mathematical” 2016 update performed by Criterium, management decided to eliminate that requirement for 2017 and changed the RS schedule for fence painting to read “2018” for each of those 17 Villages. Why did they do that? I do not know. I suspect that they might have done that because that money was needed for a different project for which there was no funding authority in the budget. Were similar deferrals made in 2016? I don’t know but I do know that the reported total dollar value of all changes made in reserve spending for 2017 and deferred to 2018 (based on the 2014 RS) was at least $550,000.

Now, this year our management team has been busy making similar changes to the 2018 RS plan, reportedly deferring in reserve spending in 2018 “as much as $800,000.” What’s going on? Management has claimed and would have us believe that they are merely saving the homeowners money that did not have to be spent on the projects that they decided to defer to the next year.

If management is going to make such changes to the estimated life expectancy of association assets, I would hope that they are adequately documenting the basis for those changes since they are deviating from nationally recognized standards that are employed by all HOAs.

If true, that would mean that the amount of reserves needed to fund walls and fences is far greater than initially projected and will have a significant impact on needed reserves.

More on the Ham Radio Club under attack.

I had intended to report that the Management of the Amateur Radio Club was out to destroy the club.  Follow-up investigations shines more light on this matter.  On the top of Independence Center, one can obverse multiple antennas on the roof.  This construction has occurred over the last few years.  The SCA Board has procured amateur radios and supporting equipment expending tens of thousands of dollars of SCA funds.  This equipment was intended for outfitting the Sun City Anthem Emergency Prep Service Group (EPSG).  The EPSG has a room in back of Channel 99 in the Independent Center.  This room is where the amateur radios are located.

The SCA View-Journal, Inc. is an educational and news service designed to support the information interests of Sun City Anthem homeowners and is not affiliated with the Sun City Anthem Community Association, Inc., Del Webb Corp., or Pulte Homes, Inc.