Today’s SCA Election Committee meeting was an important part of the SCA Board election process because it was the official start of the election process where candidates drew lots for their ballot position.
What could it hurt if I drew a lot until the proper authority rules on my eligibility to serve?

Instead of considering the rejection of my candidacy for the Board as final, why not just treat me like any other neighborhood volunteer  – at least until there was one iota of proof that I really was worthy of such vilification?

What happened went I went looking for justice?

I gave the Board and management notice that I was appealing the 2/9/18 Notice of Ineligibility that the Clarkson Law Group had whipped up on SCA owners’ dime to make sure that someone who had the support of at least 2,000 owners was blocked from even being a candidate.

In the prior notice, I asked for them not to use the attorney or security to threaten or humiliate me. They accommodated me only insofar as owners didn’t  pay for an outside agent to ensure that I was relegated to pariah status. But then, they knew full well, they didn’t need to bring in the heavy-weights, the Election Committee – dutifully, sternly, and totally predictably stepped up to take on the enforcer role.

The Officials act official, or was it officious?

Before the meeting, I went to the EC chair, Carol Steibel, and told her that I was appealing the attorney’s decision to deem me ineligible and that I wanted to draw for a ballot number so I could stay on equal footing in the election process until a determination on my eligibility was made by proper authority (NRED).

When I handed her my 2-page appeal, she tossed it aside testily, and said,

“How could you have? I just wrote it this morning.” said I.

“Well, I read something else, then. The attorney said you can’t be a candidate, and we have to listen to the attorney.”

When I sat at the table, two members of the committee told me sternly to get away from the table. Only candidates could sit there.

Carol somberly started the meeting by saying that the meeting would not be recorded and that no one was allowed to record it as it was against the law.

The thing about this edict that totally chaps my hide is a major owner protection to allow recordings so, to be ornery I guess, I said I was going to record it. Their reaction was intense. Forrest Quinn joined in saying that he did not authorize recording him.

Bob Burch said he wanted my assurance that I wasn’t going to record it. I said I wasn’t recording it, and he announced to the crowd,

“We’ve had this trouble before”

further solidifying the ‘Us vs. Her’ dynamic permeating the room.

Carol very formally read a notice from the attorney about my situation. She would brook no argument. It was FINAL!

My, my, my…what an awful person that Nona is! An existential threat.  Carol’s tone made it totally clear that questioning the veracity or authority of the attorney would be considered treason, the concept of “Innocent until proven guilty” totally shrouded by her blind spot.
P.S. None of the above statements from the attorney that Carol reported are true. I’ll be handing the documents over to NRED to prove it as soon as I can.

Carol was so busy genuflecting before Clarkson’s awesomeness that she might have forgotten for the teensyist second that as the Election Committee Chairperson, her primary job is to protect the integrity of the election process, to ensure the election is free from undue interference and to protect ANY owner from being disenfranchised.

Maybe a little training? I suggest training should come from NRED or any competent, independent professional, but absolutely not conducted by Adam Clarkson.

Gary Lee, Board candidate new to the scene, innocently asked for a better explanation why I was dumped, but Carol was adamant that she had said all that needed to be said on the subject, and that he was holding up the very, very important business of the committee.

Tobin appeal to being disqualified as a candidate 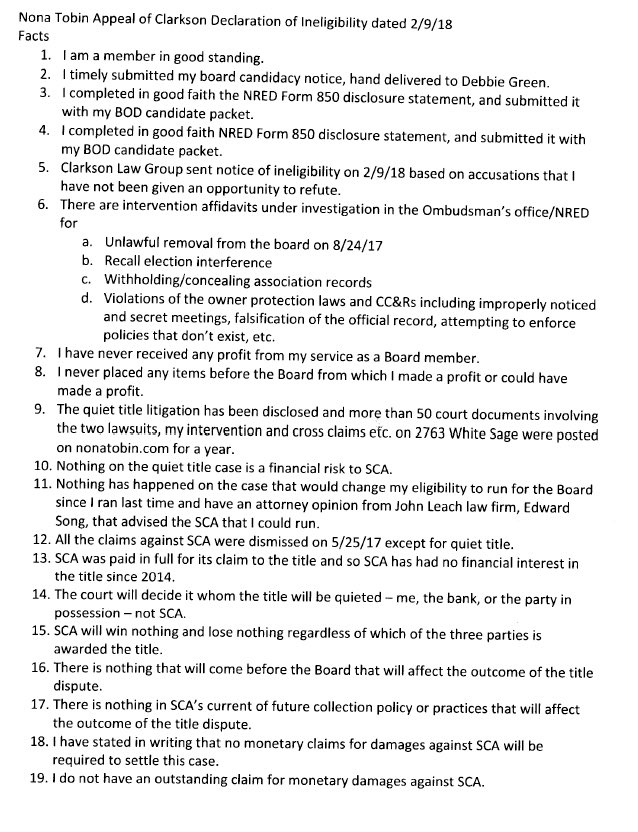 Quick note about # 4 above, it should read that in addition to the NRED form 850, I also submitted the disclosure form as edited by the attorneys even though it was not legally-mandated for me to do so. 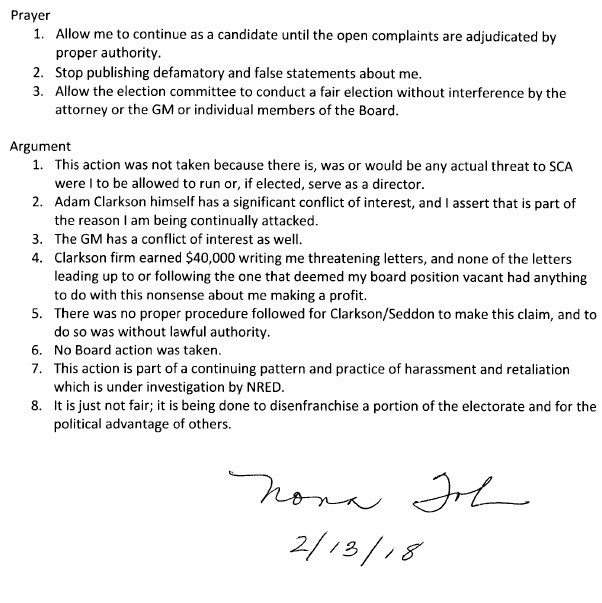 Ask Yourself:
Would my actions make sense if I were on the Board to make a profit?

What does my being on the Board have to do with what the court does about the house? The Board doesn’t have anything to say about it.

But, for the sake of argument, let’s say the Board could vote on something related to the outcome of the title fight. If my ulterior motive was to get the Board to vote to quiet title to me instead of the bank, wouldn’t I have tried a different approach?

If I were trying to get a Board vote on litigation I could profit from, wouldn’t I have been smarter to ingratiate myself and “go along to get along”.

Ask yourself:
Isn’t it more likely that the same over-compensated GM and attorney, after protecting compliant directors in power from a removal election, just created a convenient ruse to bypass owners’ votes and remove the thorn in their side and block me from coming back?

9 thoughts on “Election Committee was inhospitable, angry even. Nevertheless, I persisted”