The last SCA Board meeting of the year is tomorrow at 1:30 PM. I’d like to point out a few things that you might not notice immediately, but which are important to for owners to know the full story. 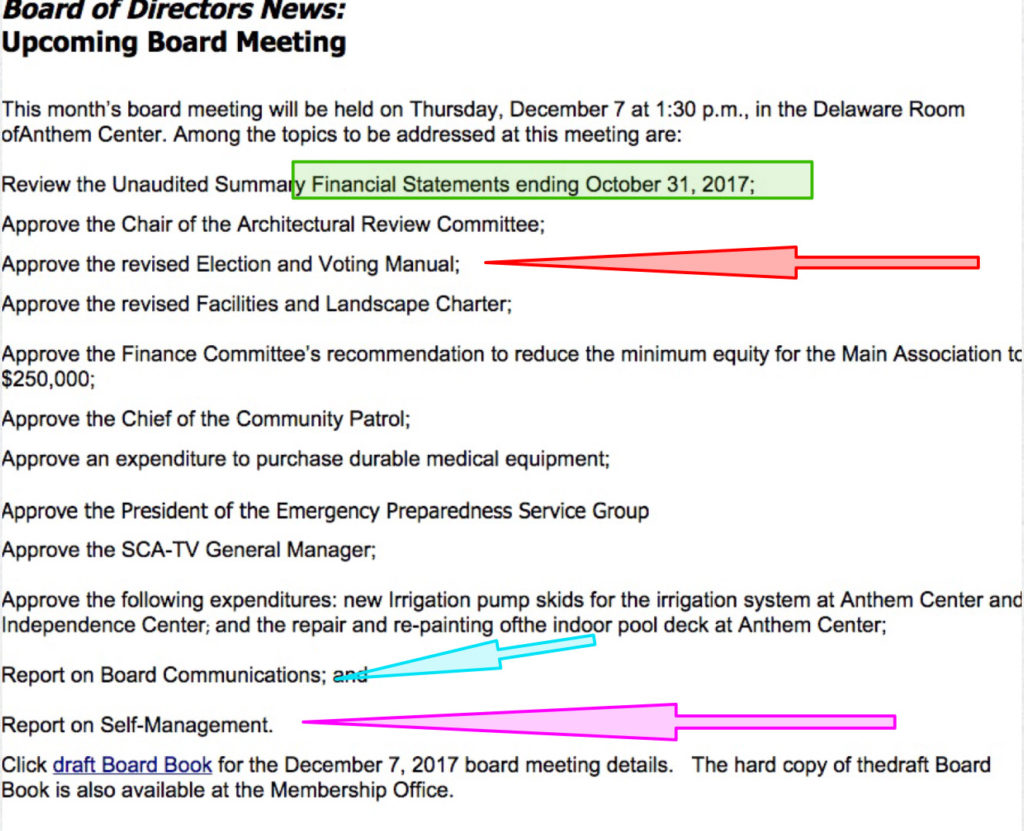 Reviewing policies on voting may be really boring, but it is important to protect homeowner control over who represents us on the Board. There has to be a sound, uniformly administered system in place to prevent ANY election interference from tampering with ballots, abuse of power, or even unfair communications.

The largest HOA board election rigging scandal in Southern Nevada involved primarily attorneys who were supposed to be neutral outsiders who stacked HOA Boards to channel construction defects litigation.  This Election and Voting Manual is intended to ensure that the SCA homeowners actually control who sits on the Board and that those Board members actually work SOLELY for the benefit of the homeowners.

Yet, it doesn’t matter what is in this or any other SCA policy manual if the Board doesn’t follow SCA’s own rules or if it allows the GM and/or the attorney to manipulate the process in favor or against certain owners.

Cherry-picking which laws to follow is a slippery slope

There are several areas where our election process is not in conformity with NRS or the SCA Bylaws. For example, SCA Board does not have a nominating committee as required by SCA bylaws 3.4a below. While there may be good reasons to not want to have such a committee, this is an example of how problematic it is to simply disregard a provision. The bylaws must be uniformly enforced and not simply disregarded. The narrow exception is when the bylaws explicitly conflict with a mandate in a Federal or state law.

Filling Board vacancies after a director is removed.

The final clause of SCA bylaws 3.6. requires a vote by the unit owner to fill a Board vacancy caused by a Board member being removed.

“Upon removal of a director, a successor shall be elected by the Owners entitled to elect the director so removed to fill the vacancy for the remainder of the term of such director.”

The proposed change to the Election Manual, below in green, apparently attempts to justify retroactively how Jim Coleman was appointed, but even the new provision doesn’t allow for an appointment to be made without any notice to owners, any candidate nominations, or the required vote of owners.

Note that there is nothing in either the existing nor the proposed versions of the Election Manual that gives the Board legal cover for what they actually did to remove me nor what they did to replace me nor what they might be contemplating to do in the next election (keep me off the ballot).

These proposed changes don’t describe what the Board actually did nor do they conform to the bylaws. The Board is simply pretending they have the authority to act against laws and policies “upon the advice of Counsel”. We’ll see.

Complaints to the Election Committee are not fairly handled

The Election Committee complaint process is to informal and allows for problems at both ends of the spectrum. On one end of the spectrum, informal complaints may be submitted without evidence or substance which could just waste the committee’s time .

On the other end, there is substantial risk of unequal treatment occurring, or even being merely perceived, if there isn’t a good enough procedure defining accountability, investigation, documentation and notice requirements. It’s sloppy management, and it reduces the community’s trust of the election process. It also allows interference in the independence and neutrality of the Election Committee.

In the proposed draft, there is still no standard format for resolving complaints, no required documentation to be maintained in the official SCA record, and no notice of the disposition formally given to the complainant.

I recommend the process defined in the SCA CC&Rs and utilized by the Covenants Committee would be a good model for the Election Committee to employ to fairly investigate and document complaints regarding Board elections.

In June, I proposed a resolution to improve Board-owner communications , but couldn’t even get a second to the motion. Now, five months later, nothing has been done to increase transparency or meaningful utilization of owner expertise in governance.

Rex appointed a couple of Directors to be a Board Communications “task force” (with no owner involvement)  and here are their recommendations: 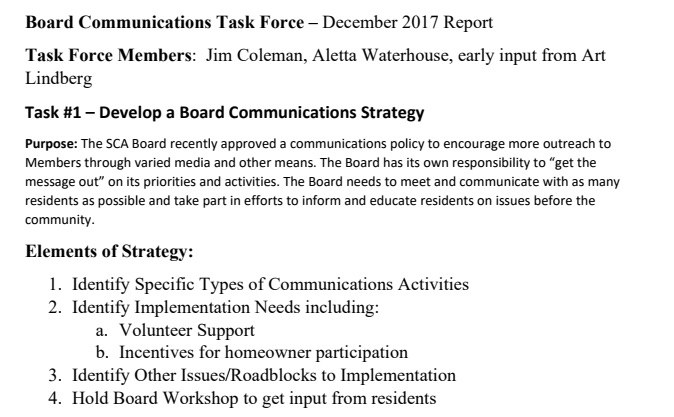 Here’s what should be done immediately:

Item 15B “Self-Management” is listed as New Business to be presented by Tom Nissen rather than the GM.

The paragraph above the total back-up in the Board book to let owners know what the Self-Management item is about.

This raises a lot of questions about the Board’s failure to protect homeowners by hiring a GM without ANY of the defined terms and conditions of employment required in a management agreement.

After the Board meeting, I’ll let you know if any of these questions have been answered. Or if there are just new ones.

4 thoughts on “December 7 Board meeting items of interest”