Lucky buyer got a half million dollar house for $30,000…
but he’s getting an even bigger windfall

Nice deal if you can get it

…but just exactly how did that guy, Frank Komorowski from Williamsville New York, even know about the auction.

The homeowner and her real estate agent didn’t know it was going to auction and neither did the potential buyer who had an offer on the table.

The sale was advertised in the Nevada Legal News, but that seems to be a hard way for a guy off the street to find out about how to take advantage of such a spectacular windfall. 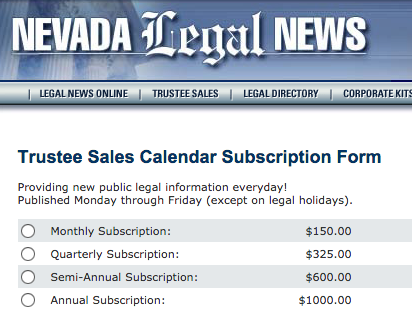 Frank is a Super Shopper indeed

I’m not saying Frank Komorowski is a straw buyer, but he’s gotten some really great deals in 2018 besides the one in Darcy’s story:

Who was notified about the sale?

That’s a very good question, and, now my curiosity is piqued. So, to find out, I’m doing a little more public records research.

If random guy can make a killing at these mysterious HOA sales, who’s on the losing end of the deal?

Just about everybody else

That can’t be right!

Well, it’s certainly not morally right for HOAs to allow their agents to engage in abusive debt collection practices.

Yes. It’s definitely not legal to keep money that’s not yours. NRS 116.31164 says exactly how the proceeds of an HOA sale are to be distributed. The debt collectors just don’t do it.

Keeping all the money (except nine months of assessments to the HOA plus interest) is just about all they distribute because they have been getting away with it.

When there is so much money to be made by cutting corners and playing fast and loose with the rules, lots of people who are supposed to be fiduciaries go to the dark side.

What about at SCA?

SCA is no better. SCA has been ripped off by EVERY ONE OF ITS DEBT COLLECTORS, to a greater or lessor degree, since 2014 (that I know of, for sure).

When the A & K bankruptcy was dismissed, and the creditors were told to pound salt, it looks like the attorney/debt collectors had kept $2.6 million out of $2.9 million they admitted receiving in HOA sales proceeds.

And there’s a multi-million dollar mansion in David Alessi’s sister’s trust’s name in Malibu (unless he’s picked a new place to hide  assets from creditors).

Retained quite a bit over the legal limit, I’d say.

More to come about the exciting ways HOA agents make the big bucks for a few lucky winner while the HOA homeowners foot the bill.