Last June I did not think passing around recall petitions was a good idea. I thought it was a fool’s errand – disruptive and doomed to fail.

However, I am a strong, some say overly-aggressive, defender of owners’ rights. I just hate it when people with power abuse ANY owner’s rights, but especially if they use dirty tricks or create an uneven playing field and make the little guy pay the price.

That’s what’s happening here now. The opponents of the removal election are making owners pay way more than we should, and they are trying to get us to blame the wrong people.

All the tens of thousands we will be paying for this removal election (above the less than $10,000 cost of an annual election) could have been avoided if the GM hadn’t blown me off by not even acknowledging my July 20 email: 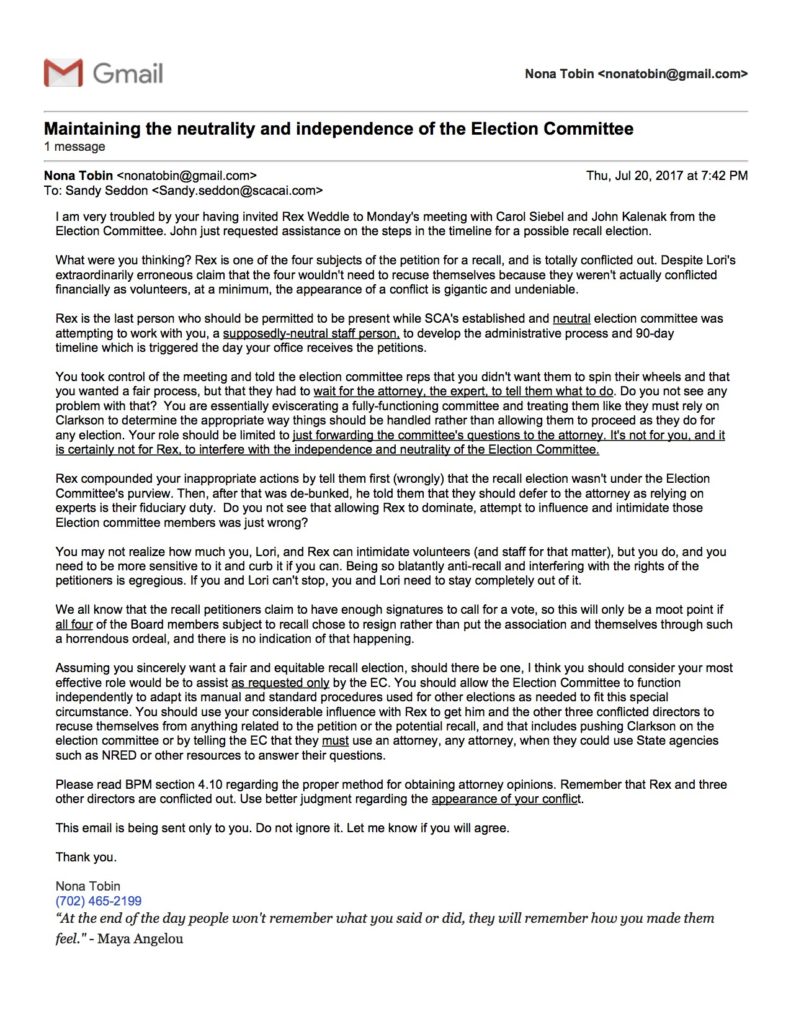 Sandy Seddon didn’t answer me. Why should she? She knew that there was no one on the Board except me that cared one whit about maintaining the independence and neutrality of the Election Committee. Quite the opposite, she knew that she had the votes to approve anything she wanted to do make the removal election process difficult.

Who decided that these actions were in the best interest of owners?

Now, SCA owners are obligated to pay a bungling CPA firm $20,000 for the work done through September 30 no matter how poorly it was done. We will be on the hook for maybe triple that amount because their errors or omissions are significant enough that a second recall ballot may need to go out with Bob Burch’s name added to it.

Who made the decision to take away the Election Committee’s job?

Who decided that it was in the owners’ best interest to use an attorney and a CPA for the removal election when the attorney in five months is already billed $150,000 – FOUR times the $37,500 budget (In just September the attorney billed $43,873 and the CPA who replaced the volunteer Election Committee billed $20,000)?

Did I mention that there was: