Rex Weddle’s self-serving article “The Attempted Recall” in the December Spirit is a stunning, wrong-headed form of revisionist history. As President, Rex is the only one who can speak for the whole Board and in that role, he gets to speak for the Board in the monthly President’s Report in the Spirit.

In this case, Rex inappropriately, if not unlawfully, used the Spirit as a bully pulpit to try to intimidate his political opponents and to blame them for things that were actually his fault.

If Rex was speaking as an individual, can any individual have a full page of the Spirit to express her opinion about the recall?

Rex began by describing the recall  as “an organized effort” that took five months to gather enough signatures to call for an election.

That’s not what I saw happening. Without any organized group, the recall movement just seemed to spring into existence. It seemed to be an almost organic movement of people whose only commonality seemed to be signing some petitions. Whoever they were, they were exercising their LEGAL right to call for a removal election, and those legal rights to vote are sacrosanct.

I heard owners were signing because of anger about changes for the worse since switching to self-management, like new requirements for the Clubs, the (lack of a) restaurant, the shabby treatment of the Foundation Assisting Seniors, the GM’s pay or her surprising owners with the loss or change of some amenity, such as the group exercise $45 card.

I also understand that the over 800 signatures were collected in less than five weeks over the summer when many of the owners are not even in residence. Such a significant statement of customer dissatisfaction should not be trivialized.

And yet, Rex  purported to be perplexed as to why any owners would even try to recall four members of the Board (including Rex), saying

“NRS 116 makes the recall of executive board members extremely difficult”.

This is correct only insofar as it is a fact that the only LEGAL way to REMOVE a director from the Board is through the legally-defined, arduous process beginning with 10% of the owners calling for a recall election.

Rex seems oblivious to the irony that he violated this very section of NRS 116 when he voted to remove a Director from the Board whom ZERO owners signed a petition to recall.

“Since most of the allegations boiled down to simple a difference of opinion about past decisions made by the Board,…”

Actually, the petitions listed owner complaints and grievances (link is as reported on Anthem Opinions blog, but which were NEVER reported on the SCA website or at Board meeting or in the Spirit) that were not just “a simple difference of opinion”. They were stark differences between right and wrong.

The very first allegation in the petition –  “an unprecedented number of violations of NRS 116 and SCA’s governing documents” – was certainly verifiable had an investigation been conducted and subjected to public scrutiny.

“…there was little evidence to suggest the targeted directors were guilty of any sort of high crimes and misdemeanors that would justify the widespread outrage needed for recall.“

In what world would it be good business to blow off customer service complaints from more than 10% of your customers without any investigation?

“The real reasons behind this expensive failed attempt to recall half the Board are still not clear.”

Let me break it down for you, Rex. There are lots of owners that are dissatisfied with the way they have been treated by you, the Board and by the GM. Many want to change the direction the Association is headed on your watch.

While you acknowledge that there was “widespread outrage”, you don’t see that it is YOUR job to fix the problems, not just say they don’t exist. It is not, under any circumstances, correct for you to blame your customers for not liking your product nor to blame them for the expense of the CPA and attorney you wanted.

It is NOT responsible leadership to claim that the complaints of 800 people are not justified and don’t need to be seriously investigated. Owners are your customers. No matter what your name is, you are not their king.

“Those who worked for it denied being its organizers. To this day the leadership of the group behind the attempted recall has never stepped forward and publicly made itself known.”

Attempting to identify the leaders of the recall movement is an unacceptable form of harassment and threat of retaliation against owners who exercised their only LEGAL means to remove some Directors.

There is already substantial evidence that, if identified, anyone involved in the recall will be subjected to inappropriate abuse by those in power.

I can make this assertion on great personal authority as I have been threatened, harassed or had my character maligned  for, among other things, my defending the LEGAL rights of the petitioners to collect signatures unmolested in the common areas  and for my attempting to prevent election interference

For example, it is unconscionable that David Berman, head of OSCAR, has been given the names of the people who signed the petitions and that he has threatened that he would recommend against their serving on the Board for that reason. (Note that no official information about the petitions or the recall was ever formally given to the Board or the owners, and even though  I was a Board member and the liaison to the Election Committee, I learned about the petitions being submitted from David Berman’s blog.)

No wonder dissatisfied owners don’t want to be identified because they are crucified for speaking up. It’s exactly the same reason many sexual harassment victims nationwide were silent for years.

“Because a majority of the Board was targeted for removal, recall proponents argued the Association’s Management and unaffected directors could not be trusted to run a recall process. So the SCA Election Committee was bypassed …”

In fact, I personally advised against the GM being involved for her poor judgment, as an example, by including Rex, a subject of the recall, in a meeting with Election Committee officials to develop plans for the recall election. 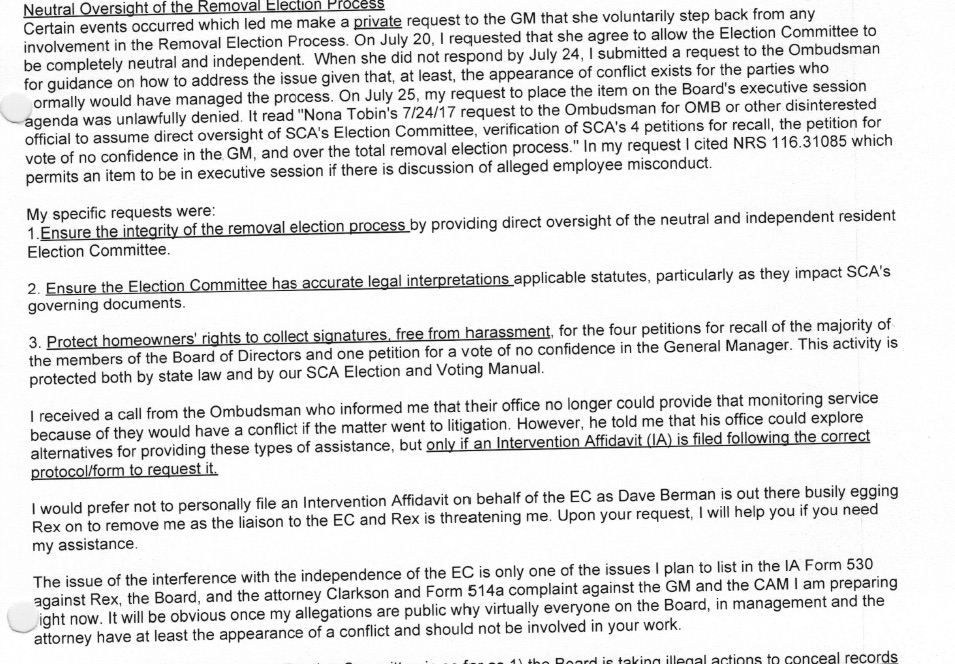 The horrible waste of over $73,000+ unnecessary expenditure for the attorney and the CPA to muck up the process can be 100% attributable to Rex Weddle. As Board President, Rex is accountable for getting the Board to allow disempowering of the Election Committee (in violation of the bylaws, adopted Board policies and the budget) which in the end made the recall process more expensive, more divisive and less fair.

As a subject of the recall, Rex should also be held accountable for exerting undue influence over the process and taking actions to the detriment of the owners who were exercising their LEGAL rights to call for a vote to remove him.

“Purposeful misstatements, allegations of fraud and assertions of corruption were made, not only against the targeted directors, but the whole Board. Our own SCA Management team and Association counsel were also subject to these attacks. These allegations, without much in the way of factual support,…”

Rex’s treating such serious allegations so dismissively is irresponsible. His claiming the allegations are baseless without allowing any investigation or attempt at remediation is a complete failure of his, and the Board’s, duty of care to the owners.

I will continue rebutting Rex’s article in another blog. The amount of evidence I have to contradict  Rex’s misrepresentations is overwhelming .